“The multiverse is the perfect metaphor for what it feels like to be alive today.” 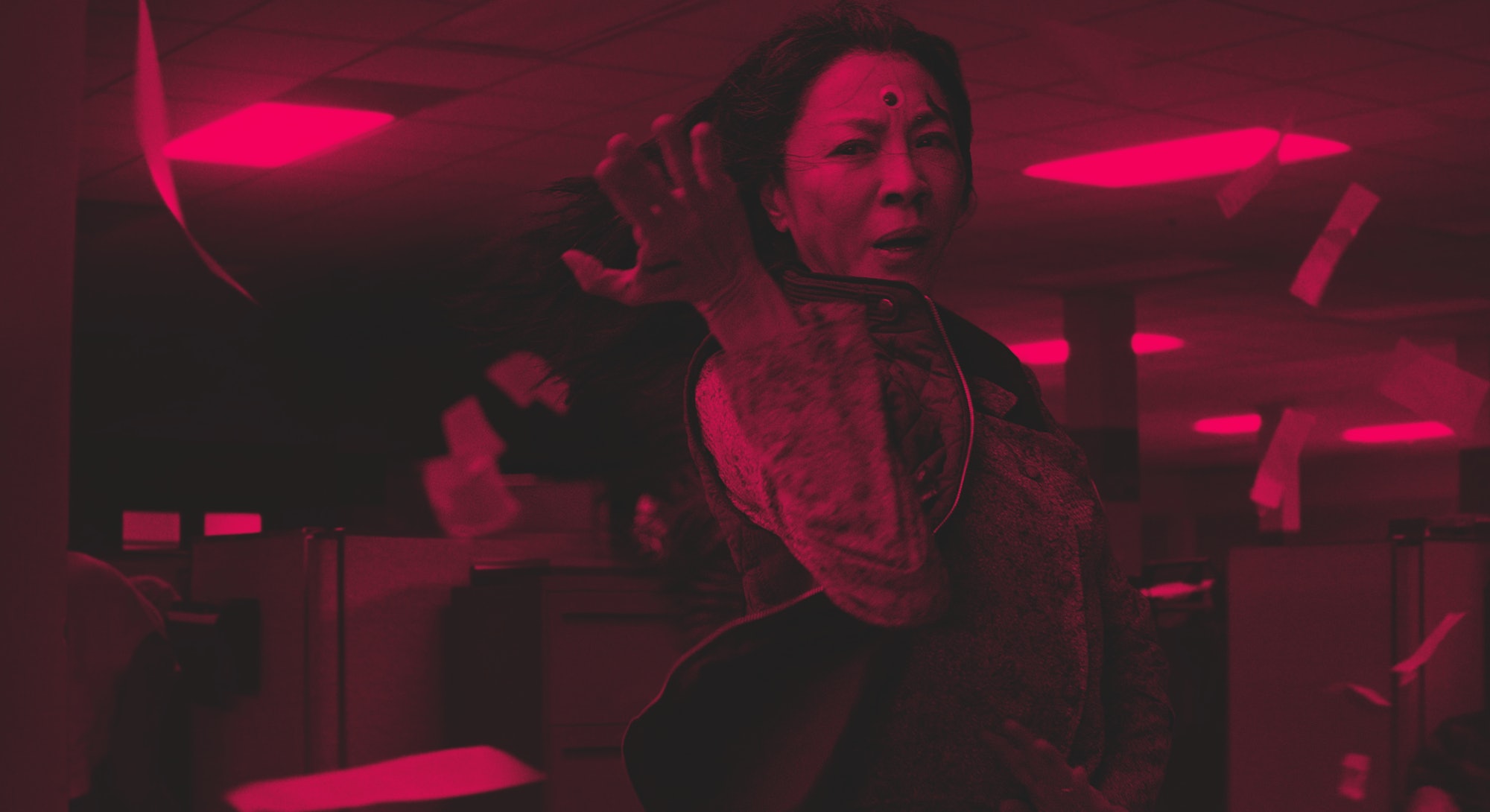 In the new sci-fi action-comedy Everything Everywhere All at Once, directed by the filmmaking duo Daniels (Daniel Scheinert and Dan Kwan), a middle-aged Chinese immigrant becomes an unlikely hero when she harnesses the talents of her different lives that exist in infinite parallel worlds. The riotous picture from A24 stars Hong Kong icon Michelle Yeoh as Evelyn, a laundromat owner who is quite literally living her worst life.

For Daniels, tapping into the multiverse didn’t mean crossovers but pondering how choices in life topple like dominoes. Whether big or small, our choices have all led to the lives we lead now. Born to Chinese parents, Dan Kwan especially believes the immigrant experience is suited to the multiverse in ways that superheroes aren’t equipped.

“The immigrant story is so much about wondering ‘What if?’” Kwan tells Inverse, “Longing to know what would have happened if you stayed, if you've gone to some other city, wondering how life would have turned out. It’s all baked into the multiverse.”

Everything Everywhere is the second feature by the Daniels. It opens March 25 in theaters, six years after their surreal comedy Swiss Army Man starring Paul Dano and Daniel Radcliffe (as a talking, farting corpse). Everything Everywhere has the Daniels’ chaotic humor seen in their last film; observe the absurd ways characters “verse-jump,” the deep conversations between rocks, and the existential symbolism of an everything bagel.

But Everything Everywhere also demonstrates how the Daniels have evolved as artists, and it is the result of a multitude of brainstorming sessions that grew frustrating.

“What if my mom got stuck in The Matrix?”

“Because of how long films take [to make], it was very hard for us to commit to one idea for two or three years,” Kwan says. Somehow, they arrived at the multiverse. “That opened up the possibility for us to combine all of [our ideas] than choosing one. Let’s do it all.”

In an interview with Inverse, Dan Kwan and Daniel Scheinert talk about the origins of their buckwild genre hybrid and how the collision of worlds can lead to understanding.

Where does a movie like Everything Everywhere All at Once even come from?

DANIEL SCHEINERT: It’s hard to pinpoint. There was a moment where three things coalesced. We had the idea of “verse-jumping” as an excuse for Stephen Chow-ish fighting techniques. Then we had the existential idea of a multiverse movie going too far, how that would make an audience feel like staring at infinity. And then [there was an] idea of the immigrant family, because there were so many stories from Dan’s life that paired up really well with science fiction. And now we have a protagonist I hadn’t seen over and over.

DAN KWAN: The joke pitch was, “What if my mom got stuck in The Matrix?” That already makes you think of so many things. But you appreciate how hard it is for parents like ours to exist. Even in normal life, without the multiverse. How hard it is to just exist in modern chaos, barely staying afloat. Screenwriting books always say to figure out what the worst situation you can put characters in. Both of our mothers are very strong women. The worst thing you can do is put them in the multiverse. It’s an extrapolation of that overwhelming feeling we’re all feeling today.

Michelle Yeoh is an action icon in Hong Kong and Hollywood. What did Yeoh bring to the table given her expertise?

DANIEL SCHEINERT: Michelle is lovely to work with. We accidentally wrote a part that no one else could play. We did know she’s an incredible martial artist. On one hand, it was an adventurous protagonist, a middle-aged Chinese-American woman. But it wasn’t that adventurous because it was Michelle Yeoh. We know she can carry a movie like this.

This is the second feature film you’ve done as a team. What was your preparation and methodology for directing complex action choreography?

DAN KWAN: We both grew up on Hong Kong cinema. Yuen Woo-ping’s choreography was a guiding North Star. What differentiates that kind of choreography and shot design is that every shot is catered towards the move. For this combo, what is the best shot? Don’t think about eye lines or continuity. Not a lot of people do that these days. It’s more expensive and requires more thought. Most people don’t have the time or money to do so, and we were like, how can we do that on a budget?

DANIEL SCHEINERT: We came up in music videos. You don’t get dialogue or sound design, and it transitioned easily [for us]. We found The Martial Club, YouTubers from Orange County that make homemade kung fu movies in their neighborhood, and paired them with Tim Eulich who we’ve worked with many times and was stunt coordinator. We leaned on them heavily to pull off very ambitious action on a budget.

In other interviews, you’ve cited Jackie Chan as an influence. How did you add your own spin to Chan’s blend of humor and action?

DAN KWAN: It wasn’t too hard for us. We think things are funnier in our films when they are taken seriously. The more serious, the better executed, and the more time and thought that goes into a joke, the funnier it is. Our goal was to make action that you have never seen before.

DANIEL SCHEINERT: In general, we’re happier when there are different emotions at the same time. Drama works better for me if there’s humor. If you watch five minutes of non-stop action, you get kind of numb to it. But if there’s a great joke in the middle, it pulls you in and reminds you of the stakes. It’s just our favorite way to do action.

Jenny Slate plays a character named “Big Nose.” What was her role all about?

DAN SCHEINERT: Part of the joke is that Evelyn is mean and wrong in that moment.

DAN KWAN: The beginning is filled with slights — weird, sometimes racist, kind of mean. It’s the kind of thing that happens when a bunch of people exists together. So at the beginning, [Michelle Yeoh] calls her “big nose” in Chinese, but she's nice to her in English. I find it very interesting when worlds collide. The movie becomes a movie about fully understanding everyone.

The multiverse is having a moment right now, evidenced by Marvel films. What about the multiverse excites people?

DAN KWAN: There are two versions of it. There’s the commercial version; we see worlds combined, and it feels like a family reunion. I get all the Spider-Mans in one place. I understand why that is appealing. I watch the Marvel movies, I love them, but it’s very much fan service.

To us, the multiverse is exciting because we live in a really unique moment where there’s too much information and too many stories colliding every day in our heads. The multiverse is the perfect metaphor for what it feels like to be alive today. [Our movie] is about chaos and finding loved ones in that chaos.

DANIEL SCHEINERT: We got the pleasure of interviewing David Eagleman, a neuroscientist. He told us there's a grand tradition of storytellers trying to take cutting-edge science to the masses. It's popular because it's real. That's crazy. We're trying to make sense of the fact physicists think it might be real. What a terrifying thing. We have to make sense of that somehow.

Everything Everywhere All at Once opens in theaters on March 25.