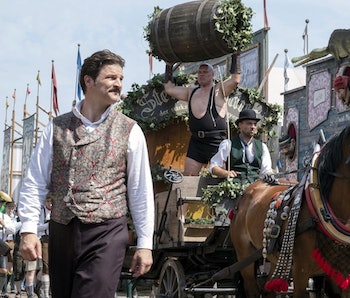 Netflix's slate of Halloween content hasn't been entirely restricted to horror movies. The streaming service also imported the German series Oktoberfest: Beer and Blood, which was timely and wholly different. It chronicles the 1900 Oktoberfest and through the lens of one man's quest to completely change the game, no matter the cost. It's the perfect fall show with just enough scares to make it spooky, but with only six episodes, is there more on the horizon?

Here's everything we know about Oktoberfest: Beer and Blood Season 2.

Is Oktoberfest: Beer and Blood renewed for Season 2?

This question is more complicated than it seems. Oktoberfest: Beer and Blood initially aired on German television under the title Oktoberfest: 1900. Netflix bought the international distribution rights, meaning they can bring it to countries like the US as a Netflix original. So while it's a streaming-only production stateside, in Germany, it aired on the channel Das Erste.

While Netflix hasn't renewed the series for a second season, the renewal could come from Das Erste, with Netflix distributing globally to subscribers. However, the series creators have already thought about where they'd like the series to go in a second season.

When might Oktoberfest: Beer and Blood Season 2 be released?

There isn't a date as of yet, but if Netflix wants to cash in on the same novelty surrounding the first season, the clue's in the name. An October 2022 release makes perfect sense; it's just a matter of whether the timeline will work, considering the COVID-19 restrictions surrounding filming. It's easy to see how a show centered around an event involving large drunken gatherings of people may prove an issue to film.

Is there a trailer for Oktoberfest: Beer and Blood Season 2?

Unfortunately, there’s no trailer, but from what we’ve seen in the series so far, you can expect the same gritty underworld of Munich to be on full display. However, if you’re looking for more German intrigue, be sure to watch (or rewatch!) Dark, as the two shows share a writer.

What will happen in Oktoberfest: Beer and Blood Season 2?

Oktoberfest head writer Ronny Schalk and director Hannu Salonen tell Inverse a possible Season 2 would include the reaping of consequences for many characters and the exploration of topics only poked at in the first season.

“Prank kicked something off and he doesn’t really know what it triggered,” Schalk explains. “It’s like Dostoyevsky says: ‘The brighter the stars, the darker the night, and the deeper the grief.’”

Oktoberfest: Beer and Blood is now streaming on Netflix.