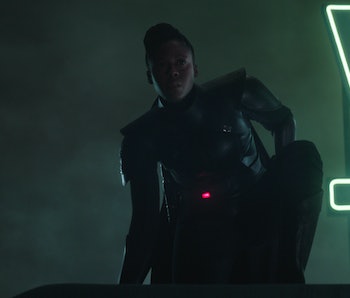 The first trailer for Obi-Wan Kenobi doesn’t focus as much on the exiled Jedi as fans might have expected. Instead, the teaser places a heavy focus on the show’s various villains, including the Grand Inquisitor (Rupert Friend), the Fifth Brother (Sung Kang), and a new character named Reva a.k.a. the Third Sister (Moses Ingram).

So far, very little information has been released about Reva. However, promotional materials for Obi-Wan Kenobi have frequently spotlighted the new villain. Now, a new Star Wars leak suggests there may be more to her story in the Disney+ series than meets the eye.

From a Certain Point of View — MakingStarWars.net recently reported that Ingram’s Reva will turn out to be a far more complicated and emotionally complex character than the Obi-Wan Kenobi teaser suggests. Specifically, the outlet claims that Kenobi will include scenes set before Reva’s life as an Inquisitor, and will show how she was pulled away from her family and forced to join the Jedi Order.

The series will also show how Reva almost perished during Order 66 and was subsequently forced into her Inquisitor position by the Empire. According to MakingStarWars, these scenes will not only allow viewers to understand Reva better, but will help explain why McGregor’s Obi-Wan empathizes with her.

In case that all wasn’t interesting enough, the outlet adds that Obi-Wan will ultimately place his trust in Reva to not pursue or harm “an innocent child” whose birth has automatically put them in the center of a dangerous conflict. It is not specified who the child is, but it seems fair to assume it will either be Leia Organa or Luke Skywalker.

Through Another’s Eyes — The events of Order 66 have been shown from a number of different perspectives over the years. However, no live-action Star Wars TV show or film has ever truly shown the deadly operation play out through the eyes of one of the many Jedi Padawans targeted by it. For that reason alone, these alleged Obi-Wan Kenobi flashback scenes feel important and noteworthy.

While this report’s claims have yet to be substantiated, it is worth noting that this isn’t the first time it’s been rumored that Obi-Wan Kenobi will feature an Order 66 sequence. The chances of it happening don’t seem particularly slim either, considering how heavily the series is expected to deal with the emotional aftermath of the Jedi Order’s downfall.

In other words, it’s always been a possibility that Kenobi could include a flashback sequence set during Order 66. What makes this particular report so surprising isn’t its assertion that the event will be revisited in Kenobi, but that it will be shown through the eyes of one of the series’ central villains.

The Inverse Analysis — Obi-Wan Kenobi promises to shine a light on one of the most interesting periods in Star Wars history — and the life of one of the franchise’s most important characters. It doesn’t seem hyperbolic to say that Kenobi has the chance to redefine what Star Wars fans have long thought about the years that Obi-Wan spent watching over Luke and Leia from afar.

If this Star Wars leak is to be believed, then it seems highly likely that Moses Ingram’s Reva will play an important role in helping the show do just that.