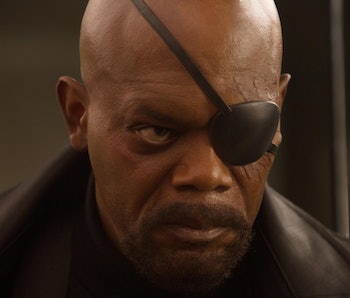 Warning: This Marvel Cinematic Universe leak is a bit of a bumpy ride. Besides the future of the MCU being up in the air due to delays caused by the pandemic, the sourcing of some "leaks" should be, at best, seen with a side-eye. But if one were to take these recent rumors at face value, they may reveal a huge shift in how Marvel Studios plans to tell some of its biggest stories moving forward.

And it could all start with Secret Invasion.

Here's what we know about that Nick Fury series on Disney+ and how it may be a Secret Invasion-inspired adventure.

What Happened? — On November 11, popular Marvel Studios leaker Charles Murphy (_@CharlesMurphy) quote-tweeted film writer Christopher Marc (@_ChristopherM), who in turn tweeted about a secret Marvel production under the working title "Grass-Fed." Marc tweeted that the secret show "seems to be further along" and that it will be a UK-based shoot alongside Ant-Man 3 and Captain Marvel 2. All these productions start shooting in 2021.

"It's starting to feel more like the Nick Fury series at this point, not Blade," Marc tweeted, acknowledging that Grass-Fed may be the new Nick Fury show on Disney+ starring Samuel L. Jackson.

Marc further tweeted, "Charles, I think was right about the Skrull connection."

The Skrulls — Confused? Let's back up. In 2019 Captain Marvel introduced the shape-shifting alien Skrulls to the MCU. Months later, in the post-credits scene of Spider-Man: Far From Home, it is revealed that the characters of Nick Fury and Maria Hill were Skrulls all along, working in disguise and under orders from the real Nick Fury. That was the last time fans saw Fury.

Both movies seemed to set up a larger narrative thread for Marvel Phase 4 as a big-screen version of Secret Invasion, a 2008 comic book crossover where some Marvel heroes were secretly Skrulls in disguise.

For a while, Marc and Murphy believed Grass-Fed was the title for Blade. But the fact that Grass-Fed is shooting in the UK, in conjunction with Captain Marvel 2 (another bit that Murphy reported in August) suggests it's the Nick Fury show, as that would allow Marvel to re-use the sets, props, and wardrobe given that the Skrulls and Nick Fury's space base are common, shared elements.

Wait, there's a Nick Fury show? — Reported in September by Variety, which feels like ten years ago, Samuel L. Jackson will reprise his role of Nick Fury in a new TV show on Disney+.

Little is known about the series, including even its plot and premise. (And no, nobody knows its release date.) Skrulls may not even factor into the show at all, though where fans last saw Fury in the MCU makes it easy to believe the show will deal heavily with Skrulls. And whether that means the Nick Fury series will actually be a Secret Invasion adaptation is another matter.

The Inverse Analysis — The pandemic has been so disruptive to normal, everyday life, never mind Marvel movies. Covid-19 has undone Marvel's plans for 2020, which would have included Black Widow and The Eternals, two entire movies fans would have seen by now if not for the pandemic. The Falcon and the Winter Soldier was supposed to be the first Marvel series on Disney+. Now, it's WandaVision, which won't stream until January 15, 2021.

While Nick Fury is not a series that Disney/Marvel is officially acknowledging (unlike She-Hulk or Moon Knight), that doesn't mean it's not already full speed ahead. It's just hard to tell which of these many trains will arrive at their stations first.