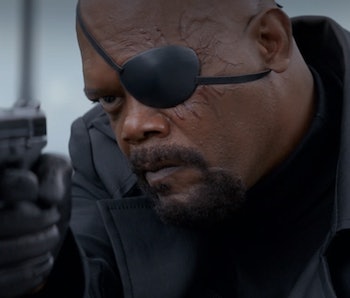 This article was originally published on September 28, 2020 and will no longer be updated. For all the latest updates on Nick Fury’s Disney+ series, check out this article instead.

Coming soon to Disney+ is the new Marvel series Secret Invasion, which will star Samuel L. Jackson and Ben Mendelsohn in what Marvel’s Kevin Feige calls a “political paranoia.” But what exactly is Secret Invasion? And how will it change the MCU?

Here’s everything we know so far about Secret Invasion, including its plot synopsis and more. Bookmark this page and come back frequently to keep up with updates until the show’s premiere.

What will Secret Invasion arrive on Disney+?

We don’t know when Secret Invasion will premiere on Disney+. While work on the series has been underway since at least 2019, the last year saw long delays to many productions throughout Hollywood, including Marvel Studios. Filming for the series officially began in September 2021. The show may come out in 2022, but that is not confirmed in any way.

What is Secret Invasion?

Secret Invasion is a new Marvel television series that will soon be available to stream on Disney+. Like most productions by Marvel Studios, the show will take place in the Marvel Cinematic Universe and will share continuity with the Avengers film franchise.

What is the plot of Secret Invasion?

The full plot synopsis for Secret Invasion is not yet available.

However, we know that the show will center around the Skrulls, the shape-shifting aliens introduced in the 2019 film Captain Marvel and represented through Talos, the supposed villain whose people were actually “revealed” to be refugees running from the powerful Kree alien army.

At the end of Captain Marvel and in the post-credits scene of Spider-Man: Far From Home, it’s shown that the Skrulls have kept themselves hidden on Earth while Nick Fury (Samuel L. Jackson) is in charge of them (somehow). The specifics are still unclear, but we do know that Nick Fury is working with the Skrulls in a way that may (or may not) benefit both Skrulls and humans.

Secret Invasion takes its name from the 2008 Marvel comic book crossover of the same name. Written by Brian Michael Bendis with artists Lenil Francis Yu, Mark Morales, and Laura Martin, the story details a long-term invasion of Skrulls who use their shape-shifting abilities to pose as Marvel’s various superheroes.

Characters revealed to be Skrulls in disguise include Elektra, Black Bolt (from Inhumans), Hank Pym, Spider-Woman, Mockingbird, and Brother Voodoo. Given that some of these characters aren’t yet in the MCU, expect the series to change the fake identities the Skrulls take on.

“I mean, we're interested in the political paranoia aspect of Secret Invasion and really showcasing the stars with Samuel L. Jackson and Ben Mendelsohn, two amazing actors that you want to have in any series, and we're very lucky to have them for that. That's the sort of primary focus of that and, of course, it will tie into other things and the Skrulls in ways you haven't seen before, but yes, anything could be anything. Wise words. But we wanted to do that as a series because it would allow us to do something different than we've done before.”

Where can I watch the trailer for Secret Invasion?

There is not yet a trailer available for Secret Invasion. With filming having begun in September 2021, it’s impossible for there to be enough complex VFX work finished to make up a trailer.

Where can I see images of Secret Invasion?

So far, there is only one image of Secret Invasion: A single picture of Samuel L. Jackson’s Nick Fury, now bearded, gray-haired, and lacking his signature eye-patch. The image was revealed on November 12, 2021, as part of Disney+ Day.

You can see the image of Nick Fury in Secret Invasion below.

At Disney+ Day 2021, Marvel introduced a new, slightly altered logo for Secret Invasion. Instead of a solid red, the logo now has green and pinkish-maroon in a way that implies some kind of camouflage, which suits the story of the premise.

Who is in the Secret Invasion cast?

Of the cast members whose characters are officially known, Samuel L. Jackson and Ben Mendelsohn are the only two playing characters we can name. Both actors will reprise their roles of Nick Fury and Talos, respectively.

The rest of the film’s cast includes:

How many episodes will be in Secret Invasion?

A total of six (6) episodes are in production for Secret Invasion. The show is being envisioned as a miniseries event than a show that will last multiple seasons.

When in the MCU timeline does Secret Invasion take place?

Specifics towards Secret Invasion’s place in the MCU timeline are vague right now. But given that the post-credits scene of Spider-Man: Far From Home indicated the beginning of Secret Invasion, it’s safe to place the series as happening sometime after the events of Avengers: Endgame. Most of Marvel’s Phase Four has been set after Endgame (except for Black Widow), so it stands to reason that Secret Invasion will follow suit.