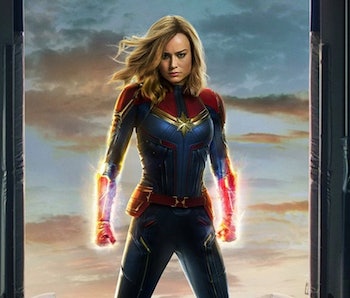 This article about the film Captain Marvel was originally published on February 4, 2019 and updated on April 26, 2021 following the release of the movie. Read on for the original article, with some new changes to reflect the latest updates on this topic.

In the aftermath of Avengers: Infinity War, the Marvel Cinematic Universe needs more heroes. Enter: U.S. Air Force pilot Carol Danvers, who flies through the cosmos as Captain Marvel. No, not that Captain Marvel.

In March 2019, Marvel Studios premiered its first movie starring a female protagonist in Captain Marvel, from co-directors Anna Boden and Ryan Fleck (Mississippi Grind). As the third-to-last film in Marvel’s “Phase Three,” Captain Marvel had the important job of introducing fans to Carol Danvers before she can sock Thanos in his big dumb purple face.

Here’s everything you need to know about Captain Marvel.

When did Captain Marvel premiere in theaters?

Captain Marvel was on March 8, 2019. That’s a little over a month before Avengers: Endgame, which hit theaters on April 26 and featured Carol Danvers.

Is there a trailer for Captain Marvel?

Yes! The first trailer for Captain Marvel, which aired in September 2018, can be found below.

What is the plot of Captain Marvel?

Captain Marvel is the story of Carol Danvers, a U.S. Air Force Officer who becomes the superhero Captain Marvel. On Earth, Carol is a hot-shot pilot, but when she’s flung deep into space, she joins Starforce, an elite military force of the alien Kree empire. The Kree were first seen in 2014’s Guardians of the Galaxy via Ronan the Accuser, a Kree extremist.

In the process of joining Starforce, Carol Danvers’ biology melds with Kree DNA, effectively turning her into a hybrid. She loses her memory, and Captain Marvel will partially be about Carol rediscovering her human heritage.

The following is the official plot synopsis released by Marvel Studios:

“The story follows Carol Danvers as she becomes one of the universe’s most powerful heroes when Earth is caught in the middle of a galactic war between two alien races. Set in the 1990s, Captain Marvel is an all-new adventure from a previously unseen period in the history of the Marvel Cinematic Universe.”

In a red carpet interview at the Britannia Awards on October 26, 2018, Marvel boss Kevin Feige explained that Captain Marvel is a “different” superhero origin story than fans of the genre have seen before, even from Marvel.

“While it is an origin story of our hero, it is a very different origin story,” Feige told Variety.

When in the Marvel timeline does the film take place?

Captain Marvel is set in 1995, as confirmed by Disney’s Japanese website. The movie follows 2011’s Captain America: The First Avenger and the canceled ABC series Agent Carter as another period piece in the Marvel franchise. The events of the film will take place more than an entire decade before 2008’s Iron Man.

What are Captain Marvel’s superpowers?

Aside from flight and super-enhanced strength and speed, Carol Danvers is capable of energy projection and absorption.

Is she related to the other Captain Marvel?

No. That Captain Marvel, better known as Shazam, is a character in the DC Universe who made his debut in 1939 with Fawcett Comics. Due to his semblance to Superman, DC successfully sued Fawcett for infringement in 1953. In 1972, DC reintroduced Captain Marvel, under a new line of comics titled Shazam to avoid confusion with Marvel, which had introduced its own Captain Marvel in the late ‘60s. DC would own Captain Marvel/Shazam outright by the ‘90s, and in 2011 DC officially renamed the character Shazam.

Has Captain Marvel appeared in any other Marvel films?

No. The post-credits scene of Avengers: Infinity War teased her arrival, but it did not actually feature the character onscreen.

What’s this about a phone sex number?

Oh man, this is a great story. Strap in for this one.

On November 5, to encourage voting in the mid-term elections, Brie Larson shared on Twitter a new image of Captain Marvel in front of a phone booth surrounded by vintage “Rock the Vote” posters. The booth had a number, which used to belong to Disney as a “prop” number; it was once used for the Disney Channel sitcom The Suite Life of Zack & Cody. But when enterprising fans on Reddit called the number, they discovered it led to “America’s hottest hotline.” Yes really.

So you don’t have to, we called the line, and you can listen to it below.

No, but that doesn’t make Carol Danvers any less important. From the very beginning, Carol has represented progressivism and gender equality in the Marvel Universe. When she starred in the series Ms. Marvel in 1977, it was an echo of the modern feminist movement when Gloria Steinem used it for the name of her magazine, Ms.

But in spite of a strong beginning, there were some very terrible storylines that plagued Ms. Marvel throughout the ‘80s (read Carol A. Strickland’s essay “The Rape of Ms. Marvel” to get a full picture). Yet writers in subsequent years have corrected course, allowing Carol to grow into an even more inspiring hero than her original creators, Roy Thomas and Gene Colan, could ever have anticipated.

Who stars in Captain Marvel?

The big star of Captain Marvel is Brie Larson, who won an Oscar for her performance in Room in 2016. Her first comic book movie role was the goth pop rocker “Envy Adams” in 2010’s Scott Pilgrim vs. The World.

The rest of the cast is made up of returning MCU actors reprising their characters as well as newcomers to the franchise. They include:

What Captain Marvel comics should I read?

How did Captain Marvel do at the box office?

Captain Marvel grossed $426.8 million in the United States and Canada, and $701.6 million in other territories, for a worldwide total of $1.128 billion. It was the fifth-highest grossing movie of 2019, as well as the first female-led superhero movie to make more than a billion dollars worldwide.

What did critics have to say about Captain Marvel?

Captain Marvel has a 79% rating on Rotten Tomatoes, a score of 64 on Metacritic, and an A on CinemaScore. However, the movie came with controversy when people attempted to “review bomb” the pages for Captain Marvel on those sites before the film came out. Some attributed the online trolling to the casting of Brie Larson, specifically her outspoken feminism.

Will there be a sequel to Captain Marvel?

Yes! Kevin Feige confirmed at San Diego Comic-Con 2019 that Captain Marvel would be received a sequel. Captain Marvel 2 is currently filming and slated to premiere on November 11, 2022.