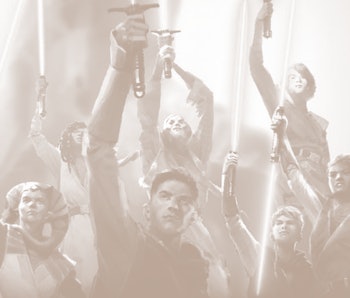 The galaxy far, far away is expanding with a series of interconnected Star Wars books called The High Republic. While the publications will follow an entirely new set of Jedi characters, two hundred years before the events of the original trilogy, we don't yet know who the villain or villains of this new saga will be. Now, an intriguing new theory suggests The High Republic will feature a terrifying, long-forgotten baddie who has a lingering connection with the animated series currently airing its final season on Disney+: The Clone Wars. It's even possible this villain could make their way into TV shows or films down the line.

Speculative spoilers ahead for Star Wars: The High Republic.

The announcement trailer for The High Republic posed the question, “What scares a Jedi?” Previous speculation posited that it was the Jedi Order’s collective loss of Force power that scared them. However, it might be something else entirely. Something otherworldly.

Prior to the release of Rise of Skywalker, fans speculated that Rey, Kylo Ren, and Anakin Skywalker may represent the Mortis beings called The Ones. First introduced in The Clone Wars, Mortis is an ethereal realm within the Force that houses three lone inhabitants: the Daughter, the Son, and the Father.

Prior to Disney’s acquisition of Lucasfilm, in the Expanded Universe/Legends continuity, The Ones had a fourth member: Abeloth. Once a mortal, Abeloth crossed paths with the beings of Mortis and joined their ranks to become the Mother. Though the Legends continuity is no longer considered canon, Reddit user Dr_Charisma predicts Abeloth is The High Republic’s primary villain and she will be the one to control the Nihil characters set to appear in the books.

The Legends series Fate of the Jedi, traces Abeloth's transformation into the bringer of chaos. Along the way, we learn Abeloth also had the ability to disguise herself as anyone, so she could very well be hiding in plain sight.

We also know the villain in The High Republic will originate from the Outer Rim, where Mortis is located. From what we know so far, there’s nothing to suggest the books’ antagonist wouldn't have a Force connection, right? It's not impossible to think Abeloth could return to destroy the Jedi once and for all.

With all that in mind, it’s a clever theory that could ultimately work to assimilate forgotten Star Wars lore with current continuity. While Lucasfilm has said there would not be a movie based on The High Republic books, it’s always possible to introduce Abeloth in live-action in future Star Wars projects.

The first High Republic books will be released in August.