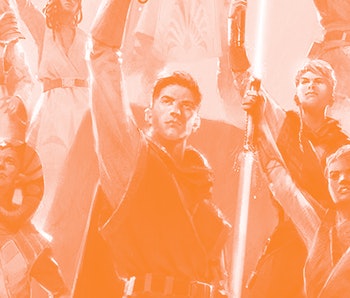 Not since the 1990s have Star Wars fans been so pumped about a new Star Wars project that wasn't a movie. This week, Lucasfilm's revelation that the mysterious "Project Luminous" was, in fact, an umbrella project called The High Republic sent tremors through the Force. For some fans, having stories take place 200 years before The Phantom Menace was seen as a refreshing new start unchained from existing canon. For others, the whole thing was old-hat and scanned as a slightly confusing publicity stunt.

But, from where this writer sits, there will not be a High Republic movie. This new announcement is not Lucasfilm's opening gambit toward a plan that results in a new movie set in this timeline. This is, in fact, a very old project that is just now making the jump to lightspeed.

According to ABC news correspondent Clayton Sandell, during The High Republic press conference, it was revealed that this original concept dates back to 2014. "The concept of a 'massive, interconnected story' was first pitched in 2014, says Lucasfilm publishing exec Michael Siglain," according to Sandell's tweets.

As most fans are aware, 2014 is a year before The Force Awakens hit theaters and certainly during a period of transition for the Star Wars franchise in general. Meaning, High Republic, on some level, is a complicated publishing project that has just now been brought out into the light. This one detail specifically could probe why this whole concept is not headed to the movie theaters, or Disney +.

Book publishing is slow. It's a much slower process than the speed at which movies or TV shows are made. There's a lot of reasons for this, but the fact that High Republic was in development for six years reveals a lot about what might happen in the next era of Star Wars. While some books are specifically published to be tied-in directly to movies (like the novelization of The Last Jedi) a lot of publishing projects (even ones connected to big IPs like Star Wars) don't always move at the same rate as films and TV.

That's why, prior to the new "new canon" in 2015, Lucasfilm generally treated the Expanded Universe Star Wars books and comics as quasi-canon, or non-cannon outright. Generally speaking, Star Wars is actually fairly strange when it comes to big franchises that have tie-in books. Most franchises (like Star Trek) don't actually explicitly make their tie-in books canon, even if the books are made in conjunction with the production of a TV show. But in 2014, Star Wars changed that, by saying that everything new would, in fact, count.

So High Republic will "count" as part of regular Star Wars canon, mostly because Lucasfilm can't walk back the decision they made in 2015. But the press release for The High Republic specifically points out that this project will avoid all the parts of the canon we've seen before. "This period on the Star Wars timeline will not overlap any of the films or series currently planned for production," the press release says, which gives "creators and partners space to tell Star Wars stories in a never-before-explored timeline."

Now, if Lucasfilm was planning to incorporate The High Republic into an entirely new series of films and TV series why would the press release include this detail? If there was a plan for a High Republic movie or TV series, it feels bizarre that Lucasfilm would outright say there wasn't one. Let that sink in. Lucasfilm's press release for The High Republic went out of its way to say this project "will not overlap with films or series," which essentially means the company wants everyone to focus on this being a series of books. And only books.

It's been a while since the Star Wars books rebooted, or were rebranded like this. Back in 1999, when the publishing rights to Star Wars books changed hands from Ballentine to Del Rey, the new series was re-branded as Star Wars: The New Jedi Order, and the first book in that series, Vector Prime famously killed off Chewbacca. This publishing project was such a big deal that there were even TV commercials that ran in 1999, narrated by Mark Hamill as Luke Skywalker. (Watch it above! Wild, right?) Obviously, back in 1999, there wasn't a New Jedi Order movie, despite the fact that freaking Mark Hamill was doing commercials for the books. We all know which Star Wars movie came out in 1999.

Similarly, in 2014, when Del Rey began publishing the first books that began the new, real-deal, canon, none of those books had anything to do with the upcoming movies of the time. For example, in 2015, a new book called Heir to the Jedi was published that focused on what Luke was up to in between A New Hope and Empire. Before that, in 2014, another of the new in-canon books was Star Wars: A New Dawn, which was a book that specifically set-up the events of the animated series Star Wars Rebels. And, guess what, when that book came out, it was explicitly marketed as a prequel to Rebels. Lucasfilm had no disclaimers. They made it clear what this book connected to.

You get it. Historically, big Star Wars publishing projects have had little or nothing to do with what happens in the films. And, even though some books are connected to an animated series, like Rebels, you could still argue that's small potatoes compared to a book that actually connects to a movie.

The only Star Wars book in the history of Star Wars that came out waaaay before a related Star Wars movie was the novel Star Wars: From the Adventures of Luke Skywalker, written by "George Lucas" but really ghost-written by Alan Dean Foster. That book, which hit stores in 1976, preceded the release — and public awareness — of Star Wars — by six months. And the only reason that happened is that originally, Star Wars was supposed to come out in 1976, not 1977. Oops.

So unless Lucasfilm is making overt mistakes like it did back in 1976, there's a good bet The High Republic is a very complicated Star Wars thing that you will only find between the pages of books. This isn't to say High Republic won't be good, but if you think this new announcement is about to change the trajectory of the entire franchise, the history of Star Wars publishing should probably convince you otherwise.

The first High Republic novels will hit bookstore and bookseller in August 2020.