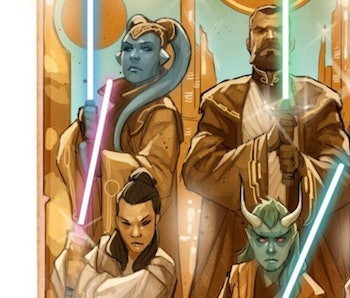 Described as the Jedi Knights of the Round Table, Star Wars: The High Republic will explore the galaxy far, far away hundreds of years before the Galactic Civil War of the original trilogy. Lucasfilm's official announcement revealed a series of interconnected stories set in the world of Star Wars all of which teased the mysterious “Great Disaster.” A brazen new theory suggests that an earlier novel may have already revealed The High Republic’s big twist.

Claudia Gray’s Star Wars novel, Master and Apprentice, saw Jedi Master Qui-Gon Jinn study a plethora of prophecies, including one detailing the arrival of the Chosen One. However, an overlooked prediction said, “When the Force itself sickens, past and future must split and combine.”

While Master and Apprentice didn’t explore exactly what that Jedi prophecy might mean, The High Republic may finally resolve the mystery behind this forgotten prophecy once and for all.

“What scares a Jedi?” is a question posed in the announcement trailer for The High Republic. Reddit user erosead argues this question is directly connected to the prophecy from Master and Apprentice. More specifically, the Great Disaster has to do with the Jedi's diminishing connection to the Force, a “regression in power,” or a disastrous occurrence due to that loss.

The theorist argues the Force isn’t dying, but that the Jedi will lose their “connections to the Force individually,” pushing them to confront their identities before finding a way to reclaim that power.

What’s more, the theorist suggests that the split between past and future is in direct reference to the Rebels concept of a world between worlds, which is essentially a mystical plane of existence that allows Jedi to pass through. That could tie back into Star Wars canon without being attached to any one character or storyline.

It’s possible the Great Disaster in The High Republic is the root of the Jedi’s decline in power. Perhaps the prophecy delineated in Master and Apprentice is what leads to the Great Disaster and culminates in the rise of Emperor Palpatine’s takeover of the Galactic Republic. Whatever the case, the theory goes a long way to explain what the Great Disaster might entail.

The High Republic trailer also teases the Jedi splitting into several factions a la the prophecy from Master and Apprentice, so it’s possible the new project will introduce the real reason behind the Jedi’s decline. Either way, this theory linking the new Star Wars project to a previous novel and prophecy may just be the first step in further understanding the Jedi who existed before Luke Skywalker's arrival.

The first wave of Star Wars: The High Republic stories rolls out in August.