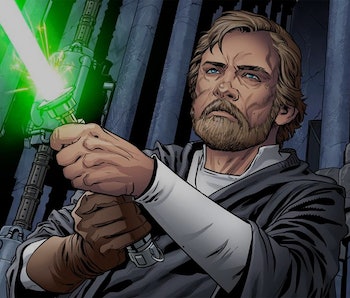 The Skywalker saga is over, but we’re still learning more about our favorite Sith and Jedi thanks to a series of new comics from Lucasfilm. The latest Star Wars comic in the Rise of Kylo Ren series just arrived, and it may have dropped a big hint about the future of the franchise and those rumors about a new movie set during the “High Republic” era of galactic history.

Released Wednesday, Star Wars: The Rise of Kylo Ren #2 examines two time periods in the life of Ben Solo: the days immediately following his rebellion against Luke Skywalker as shown in The Last Jedi, and a mission with Luke and Lor San Tekka that takes place years prior. In the flashback, these three travel to the planet Elphrona close to the Unknown Regions.

In one panel, Ben Solo speaks to Snoke in his mind and notes that they’re hunting for Jedi artifacts “on the edge of the Outer Rim, almost to the Unknown Regions.” Then, Lor San Tekka notes, “It’s probably High Republic Era. It was a time of greatly expanded Jedi activity throughout the galaxy.”

This is the first canonical reference to an era that’s rumored as the setting for a future series of interconnected Star Wars stories, including the next major live-action movie coming in December 2022.

On Saturday, Jason Ward of Making Star Wars shared via a video claiming that future Star Wars projects would be set in the High Republic era about 400 years before the Skywalker Saga, previously rumored as a time of expanded Jedi activity like Lor San Tekka says.

Dubbed “Project Luminous,” these collective efforts will unite Disney Lucasfilm Press, Del Rey, IDW Publishing, and Marvel to tell a series of stories across movies, shows, and books. The fan site ziro.hu claims the initiative might also involve video games. Broadly speaking, these stories will focus on “a group of Jedi setting out to explore the then-unknown regions of the galaxy” and that “the main Jedi characters would also have different strengths and powers, similar to superheroes.”

It’s interesting that mere days after these fan sites reported on these rumors, a canonical Star Wars comic name-drops the High Republic era like this. This is hardly a confirmation by any means, but it seems too spot-on to be a mere coincidence.

Is it possible that comics like this one are laying the groundwork for the upcoming series of stories? It almost feels like a certainty at this point, so Star Wars fans would do well to pay attention to The Rise of Kylo Ren over the next few months as #3 and #4 are released in February and March, respectively.

Star Wars: The Rise of Kylo Ren #2 is out now, and Project Luminous is expected to begin by the end of 2020.