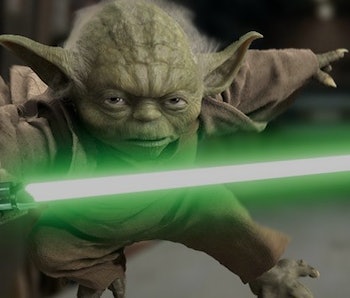 Now that the story of the Skywalker family has concluded forever (maybe?), the Star Wars franchise is headed back to a time when the Jedi were actually at their best. This might feel like deja vu, but it isn’t a mind trick. According to highly plausible rumors, the next series of theatrical Star Wars films will be set 400 years before the classic trilogy.

So, yes, it looks like the next batch of Star Wars movies will be another set of prequels. That said, they’ll likely be very different from what we saw in Episodes I-III. Here’s what the High Republic means in the Star Wars timeline, which familiar faces were alive and kicking at this point in history, and what we can expect from these new movies — and, most importantly, which classic characters will likely show up as (much) younger versions of themselves.

Speculation and possible leaks ahead.

On Saturday, Jason Ward of Making Star Wars shared that the upcoming films will take place during the High Republic era, 400 years before the classic trilogy (or 400 BBY for purists). Essentially, this is a time period well before the politics of the galaxy as we know them to exist. However, as Ward points out, the Sith “rule of two” exists at this point in the timeline, so don’t expect to see huge armies of bad dudes swinging red lightsabers. Here’s what we know so far, and what it might mean for the future of Star Wars.

It’s not a trilogy

Ward says these movies will not be a trilogy, but instead a series of films. This was something Kathleen Kennedy and others at Lucasfilm had already discussed in interviews. Back when Game of Thrones showrunners David Benioff and D.B. Weiss were still slated join the franchise, this was also thought to the case.

Right now, the only person possibly working on a trilogy of Star Wars films is Rian Johnson. However, we haven’t heard much about Johnson’s upcoming movies for some time. And trilogies seem to be out of vogue in general over at Lucasfilm.

Yoda is roughly 900 years old in Return of the Jedi, so the High Republic era will see Yoda middle-aged or, perhaps even in the prime of his years by his species’ standards. If you loved the 50-year-old “Baby Yoda” in The Mandalorian, then prepare yourself for a rowdy, millennial Yoda who snorts death sticks, or alternately, is really into astrology.

To be clear, Yoda is not confirmed to be in these movies (which are still just a rumor, if a pretty plausible one). Even they take place when Yoda is alive, it doesn’t mean he’ll show up. That said, some kind of cameo seems pretty likely.

A younger Maz Kanata could appear

Whoa! Turns out Maz Kanata was born roughly 973 BBY. During the High Republic era, Maz would be in her mid-to late 500s. If she does return, it would be an amazing way to anchor the new films with some fresh 21st-century nostalgia. After all, it’s always been a little weird having Lupita Nyong’o (who is only 36) play such an old and wise Star Wars character. If Maz returns, perhaps Nyong’o could finally give us more Maz. Who knows, maybe Maz is a main character in these films.

Jabba the Hutt is also young and hot!

Unless you are Rogue One actor Diego Luna, Jabba the Hutt is not your favorite Star Wars character. Around the time of this High Republic era, Jabba will be roughly 200 years old. Like Yoda and Maz, he’ll be relatively young, so it’s unclear if he is a huge crime boss at this time. Even so, we could get a sense for how he slithered up through the criminal ranks in these upcoming films.

400 years before the era of the existing films is a super-smart time period for Lucasfilm to pick, mostly because it’s a massive blank space in terms of what canon has previously explored. A while back, rumors circulated that the Benioff and Weiss Star Wars films might be a straight-up adaptation of the Old Republic era, which spans roughly 10,000 BBY to 100 BBY.

Most of this stuff is not considered canon anymore since this decidedly medieval era of Star Wars comes from a series of comic books and the ultra-popular video game Knights of the Old Republic. But to be clear, here’s when these old Expanded Universe Republic stories happen. (Both old and new canon are mixed here, because if you use only new canon, nearly nothing happens in the distant past.)

In old Expanded Universe canon, the period of 1,000 BBY to 22 BBY was known as a period of “great peace.” So the next Star Wars movie could be set in a time of relative peace.

A new multimedia project (thought to be a combination of novels and comics) called “Project Luminous” is set to debut sometime this year. This project involves Star Wars writers Claudia Gray, Justina Ireland, Daniel José Older, Cavan Scott and Charles Soule, and is rumored to be set around the same time period. Hungarian fan site Ziro claims “the plot would involve a group of Jedi setting out to explore the then-unknown regions of the Galaxy,” and that this multimedia project will debut with a videogame.

If you’re a ‘90s kid, you might remember something like this happening before, when Shadows of the Empire was a novel, a comic book series and a killer game for the Nintendo 64. So, basically, right now, the rumor is “Project Luminous” is something like that, but it’s going to pave the way for this new canon of the “High Republic” period, which will eventually result in new movies.

One funny thing about all of these rumors: there’s no mention of any kind of evil adversary in the galaxy. Perhaps the Jedi are in a position to do some exploring, rather than fighting. (What is this, Star Trek?!)

If Kevin Feige really is going to be involved in the new Star Wars films, the tone of the new adventures in a galaxy far, far away might feel a little more hopeful and less dystopian. After all, Star Wars can’t continue to tell stories of oppressed rebels and evil dictators, otherwise, the franchise is going to run out of coaxium faster than you can say “maclunkey.”

The next Star Wars movie is set to release in December 2022.