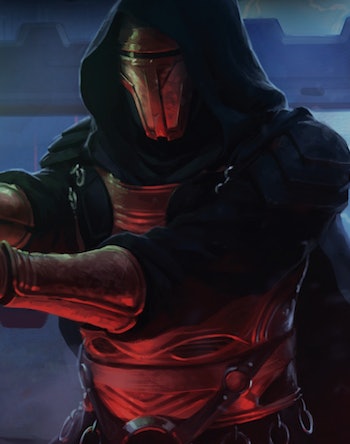 A longer time ago in a galaxy far, far away, one Jedi Knight defied the will of the Council and fought in a war alongside the Republic. And it was a choice that eventually led Revan down the dark path of the Sith. The greatest Star Wars video game ever, BioWare’s Knights of the Old Republic, tells the story of what happened to Revan later in life. One fan — Kevin Smets — has been working tirelessly for more than a decade to keep Darth Revan’s legacy alive in machinima form, creating movies out of in-game footage.

With almost 2.2 million views from various videos and more than 5,500 YouTube channel subscribers, Star Wars KOTOR Movie Saga might be considered the definitive way to experience Knights of the Old Republic if you don’t want to play the original game. That is, until a remake with modern graphics is eventually released.

Smets, a professional video editor working in Los Angeles, has immersed himself in his dramatic retelling of Stars Wars: Knights of the Old Republic for more than a decade. For him, it’s a fun, not-for-profit project that allows him to engage with fellow Star Wars fans in new ways.

Set 4,000 years before the events of A New Hope, “KOTOR,” (koh-tour) as it’s commonly called, chronicles the story of Darth Revan, a Jedi who broke with the Jedi Council and took part in the Mandalorian Wars before becoming a badass Sith.

But that’s all complicated backstory revealed in the game, which starts with an amnesiac Revan (named whatever the player wants) waking up aboard a Republic ship under attack from Darth Malak. Want to make Revan repent and return to the Jedi Order? Go for it. Would you rather become an even more powerful Sith Lord? That’s also an option. The canon version of Darth Revan falls somewhere in between. Either way, he’s one of the most powerful Force users of all time.

Smets started the Star Wars KOTOR Movie Saga in 2004 to keep his video editing skills sharp, but also to expose his then-roommate to a Star Wars story with a twist he considers on par with the reveal in Empire Strikes Back (spoiler: Vader is Luke’s dad). “I have a lot of friends that would never play this [game] for 40-plus hours,” Smets told Inverse. “Instead of playing it, my old roommate waited until I published each episode to experience the story.” Now, in 2017, the series is getting an HD reboot that kicked off in July, and the series has never looked better.

To create the original the KOTOR Movie Saga, Smets played the game on his Xbox, recorded footage via a Hi8 Camcorder into his computer, dubbed new voiceover, brought in new music, and cut all the footage together. Very little of the original KOTOR score is used, and Smets himself voices much of the dialogue.

What started as a fun side project eventually blossomed following positive fan response, especially after halfway through the story, when Smets discovered how to activate the Free Cam Mode that allows players to move the camera anywhere. “I was finally able to use the Free Cam Mode in the battles,” Smets explained. “I released that in 2006 and got a huge response. A lot of people loved it.”

By now, Smets’ take on Darth Revan has its own cinematic universe starring Logan Starr, the in-game character model that defies KOTOR canon only slightly. In many ways, Smets’ project presents a more intricate version of the story that’s already there by expanding the narrative with brand new characters and action sequences. “We don’t reject the canon,” he explained, “but we try to enhance it any way we can.”

Thus far, the legality of creating such a series hasn’t been a problem with the official keepers of the Star Wars canon at Lucasfilm. Because machinima is the visual equivalent of writing fan fiction, and the KOTOR Movie Trilogy is done without profiting in any way, Smets is able to create new stories for Star Wars fans without drawing the ire of Lucasfilm, Disney, or any other entity attached to the galaxy far, far away.

For smets, it’s always been about celebrating a game with a fantastic story while putting his own unique spin on it.

“In Episode II, I created Bria Hudson because I wanted a local from Tatooine to help them out,” Smets explained. “I wrote a unique backstory of them meeting. I wanted to start what I guess you could call The Loganverse.” To create Bria as part of the story a decade ago, Smets had to replay the game up until that point with a new protagonist and cut footage from separate playthroughs together.

But it’s not just new characters. Smets also builds entirely new scenes to augment what’s already in the game. “There’s a whole part where I split the group up,” Smets explained. “When you infiltrate a Tusken village, I split the crew up on the mission with a side quest. They were fending off waves and waves of Tusken Raiders while the main crew was going on the main mission in the game. It was something to keep the middle part of the movie feeling like a movie.”

Episode III explores universe-building even more. When Logan arrives at the Sith Academy for training, his teacher is a character from the game named Yuthura, a female Twi’lek that grew up in slavery before being recruited by the Jedi and defecting to join the Sith. Smets decided to completely rewrite the character at a pivotal point in the Knights of the Old Republic story where characters that once knew Revan begin realizing that he and the player’s character are one in the same.

“I wanted to make a huge bond between her and Revan,” Smets said. “I want her to be the one to realize before anyone knows that this guy is Revan. So I stripped all the audio off her and I had my mom voice her.” That new backstory involved a past more tragic than the canon version of this minor character: “Her dad fought in the Mandalorian Wars and had PTSD. What does that mean for a Jedi? He woke up in the middle of the night and accidentally killed his wife.”

Because of that tragedy, Yuthura grew up in fear and anger. Her backstory builds upon subtle details that expand our ideas of the Force in new ways. “She talks about how the first time you use lightning, it hurts your fingers. She became that way out of fear.”

What’s next for the growing cinematic universe? Expansion of course. Smets hopes to dive into the untold realm of the Mandalorian Wars.

The story will follow what little canon there is regarding the Mandalorian Wars, but the rest is up to Smets and his team to explore. He promises “three-movie war epic” that might look familiar to Star Wars fans but it will be set a never before seen time period. The first film is currently in pre-production and is expected for release sometime in 2018.

“We’re going to tell an entire new series of movies,” he said. It will be a “three-part story about Revan’s fall taking place before the game.” What drove one of the greatest Jedi of all time to the darkness? Fans will find out soon

The HD version of Episode I: A Familiar Path was released in July that has additional scenes, Easter eggs, and character cameos from the Loganverse. Watch it right here:

Must Read: “This Indie Developer is Remaking the Best ‘Star Wars’ Game Ever”