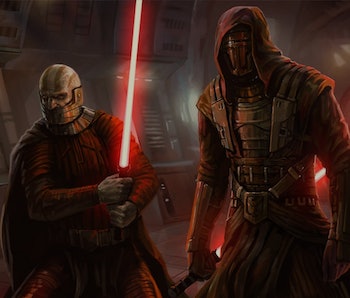 After Star Wars: Episode IX ends the Skywalker saga forever, it looks like the next set of Star Wars films will be set even longer ago in a galaxy far, far away.

On Tuesday, rumors surfaced that — as many have long suspected — the future hush-hush Star Wars trilogy helmed by Game of Thrones showrunners David Benioff and D.B. Weiss will probably be set during the “Old Republic” era of Star Wars.

What Is the Old Republic?

In the Star Wars timeline, the Old Republic era could be construed as anything that happens before Anakin becomes Darth Vader and the Emperor turns the Republic into the Empire in Episode III. But, generally speaking, the prequels are the “rise of the Empire” era. So, when we say “Old Republic,” we mean old.

Most of the Star Wars titles marketed as Knights of the Old Republic — from comic books to a popular video game series — all happen around 3,000 BBY, or before the Battle of Yavin in the original Star Wars film. In most of the Old Republic, lightsabers and space travel exist, but the aesthetic is decidedly more Game of Thrones: more armor, castles, and capes.

Knights of Ren Go Waaay Back

So, how could Episode IX connect to a series of films that takes place thousands of years earlier? The quickest way would probably be through Kylo Ren and the enigmatic Knights of Ren. In The Force Awakens, its heavily implied that the Knights of Ren are a super-old order of Dark Side badasses, which likely predate the Sith.

In Star Wars: Rebels, Ezra Bridger once found an “ancient” lightsaber that was the exact same crossguard style saber Kylo Ren uses. The point is, Kylo and the Knights of Ren seem to have aesthetic choices that harken back to an era way before Darth Vader.

It’s not crazy to think some of the new lore about the Knights of Ren dropped into Episode IX could set up their origin story thousands of years prior in the next trilogy.

There are a lot of great Jedi in the Old Republic stories, and the idea that their spirits might still be hanging around in the Force seems reasonable. What if Luke Skywalker’s ghost was to meet Jedi ghosts of the very distant past? While ambitious, this isn’t as crazy as it sounds. A deleted scene from The Clone Wars would have canonized the ancient Old Republic Sith Lord named Darth Revan.

Revan would have appeared as a Force vision to Anakin, which makes a lot of sense. Plus, at the end of the Clone Wars, Yoda faced the ghost of Darth Bane (voiced by Mark Hamill!), a Sith Lord who lived about 2,000 years before the prequels.

So, who could Luke talk to? Well, Nomi Sunrider was the first Old Republic Jedi ever introduced in the first issue of Tales of the Jedi, so it would be awesome if Luke met her ghost.

The other easy way to connect Episode IX to a centuries-older medieval era of Star Wars is already sitting right in front of J.J. Abrams, Benioff, and Weiss.

Without too much effort, Episode IX could essentially drop a preview for the GoT-style Old Republic Star Wars movies in a scene where Rey reads from one of these old books.

Imagine: Rey is flipping through the pages, learning about ancient battles waged by Jedi who lived centuries before she was born. BOOM. We cut to: actual scenes from those times!

Basically, Episode IX has a hidden slick trailer for the Benioff and Weiss Old Republic without messing up the story at all.

According to rumors, the Benioff and Weiss Old Republic movies start filming this Fall. Star Wars: Episode IX is out everywhere on December 20, 2019.