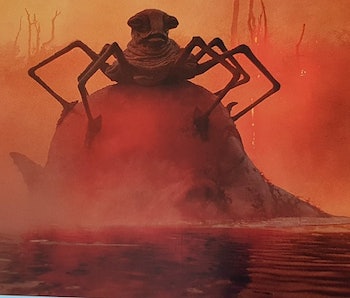 It's no secret that Star Wars: The Rise of Skywalker was a bit of a mess behind the scenes. After original director Colin Trevorrow was fired, J.J. Abrams returned to end the trilogy he started, which meant editing the movie while on location filming it to meet Disney's deadline and also changing Rey's big backstory reveal after production had already begun. But one Trevorrow creation that almost made it into the final cut is making a comic book comeback, and it could be a clue about the future of Star Wars.

The ongoing Darth Vader comic explores the character's adventures in between The Empire Strikes Back and Return of the Jedi. It's published by Disney and counts as Star Wars canon. The cover for Darth Vader #8, which won't be available until December, was recently revealed online, and it features a familiar face for anyone who followed the Rise of Skywalker drama: The Eye of the Webbish Bog.

In Treverrow's script, this terrifying alien insect sitting on a giant baby head would have taught Kylo Ren new Force powers. In J.J. Abrams' The Rise of Skywalker, it was supposed to warn Kylo Ren against seeking out the Sith Wayfinder that leads him to Palpatine.

Here's a quote from the official Episode IX novelization, which includes this scrapped scene (so it's already sort of canon?):

A giant emerged, a hairless creature sheening with wetness, bits of lake detritus clinging to its pasty skin. Its eyes were squeezed shut, but it could still see after a fashion, because draped over its massive bald head and across one shoulder was a second creature with long spidery tentacles. The two were locked in symbiosis. Kylo sensed the giant’s pain, as though it were a slave to the spidery being that clung to it. Yet neither could it survive alone.

And here's some leaked concept art from that scene:

So what does it mean that the Eye of the Webbish Bog is turning up in a Darth Vader comic? Well, it might just be a quiet nod to Star Wars fans who wanted to see this bizarre create become canon. But there's one important reason to believe that this monster could actually turn up in a future movie or show: Lucasfilm actually built this giant puppet.

Speaking to Collider in March 2020, Rise of Skywalker's creature and VFX supervisor Neal Scanlan said he and his team made a working model of the Eye of Webbish Bog and even filmed a scene with it. The fact that this puppet already exists only increases the chances that Disney will eventually use it for something.

If the creature was around during the original trilogy, that means it's also alive during The Mandalorian (set after Return of the Jedi). Could Mando and Baby Yoda seek out the Eye of Webbish Bog for answers about the Jedi in Season 2? It's possible, but after seeing Darth Vader alongside the creature, I can't get that image out of my head.

The idea of a new Star Wars movie set between Episodes V and VI in which Vader faces off against this Jim Henson-inspired puppet is too good to pass up. I can only hope that's exactly what Lucasfilm is hinting at with this upcoming comic.

Darth Vader #8 will be released on December 16.