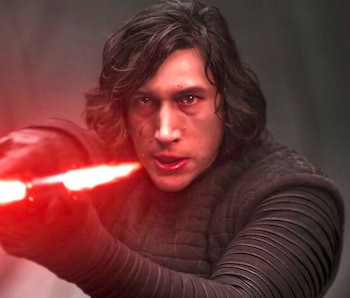 Star Wars: The Rise of Skywalker opened at the end of Kylo Ren’s hunt for Emperor Palpatine. It was a journey that sent him across the galaxy on a wild goose chase, looking for objects that ultimately proved unnecessary to the plot. Kylo’s search ended with his arrival on Exegol, the icy planet where Palps had been holed up for more than three decades. However, right before reaching his final destination, Kylo’s escapades saw him fighting a group of people in a red-tinged forest on Mustafar. Now, a thoughtful new theory reveals how including more of Kylo's fateful journey in The Rise of Skywalker might have made for a more satisfying conclusion to the Skywalker Saga.

Reddit user kylo_wren_15 aegues The Rise of Skywalker would have been far better if Kylo had spent most of the film trying to find Palpatine. After all, most of his search was packaged into the opening crawl without much follow-up. Palps is already resurrected by the time Kylo shows up on Exegol, but what if he wasn’t? The theorist suggests that Kylo’s galaxy-wide search could have entailed the hunt for the holocron or “some other ‘key’ that would resurrect Palpatine.”

Hunting for an object that would bring Palpatine back from the dead would have certainly made Episode IX more interesting. The theorist’s idea stems from the fact that Palps was seemingly camped out in Kylo’s head for two movies, but The Rise of Skywalker never truly addresses that concept. What’s more, if the movie had spent time on Kylo’s search, then it might have offered a more “legitimate explanation” for Palpatine's sudden return.

Kylo choosing to resurrect Palpatine would have given him more agency as a character. But in the version of Rise of Skywalker we got Palps manipulated Kylo — the Supreme Leader of the First Order and a powerful Sith lord in his own right — like a puppet on a string. After killing Snoke in The Last Jedi, Kylo finally didn't have to answer to anyone, or meet anyone's absurdly high expectations. Why would he immediately seek to bow down to someone else?

What's more Kylo’s visit to Mustafar, the volcanic planet where Darth Vader resided, is barely glossed over, but could have had a lot more weight and meaning than zipping around the galaxy looking for Sith wayfinders and daggers. Kylo has always lived in his grandfather’s shadow and if the film had included more scenes on Mustafar, there’s a chance that Anakin Skywalker’s presence would’ve been more strongly felt. It was a prime opportunity to more deeply explore the similarities between these two complicated, conflicted men.

We know that the scene where Kylo is battling unknown assailants on Mustafar was originally much longer. Behind-the-scenes footage from The Rise of Skywalker’s home media release revealed that General Hux and Allegiant General Pryde were also there, but the scene was ultimately cut from the film. However, if Kylo’s search had been more of a focus of the film, it’s possible we would have seen and learned a lot more about the planet and its importance to Kylo’s mission. In retrospect, it's a missed opportunity all around.

Star Wars: The Rise of Skywalker is currently available to stream on Disney+.