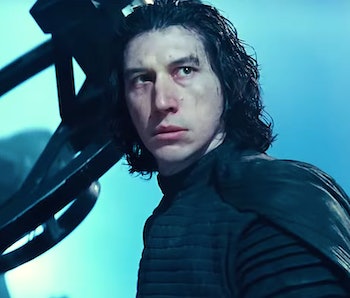 Emperor Palpatine tends to keep his true intentions close to his chest as he manipulates everyone and everything about him to accumulate power. That was especially true in The Rise of Skywalker, when his cryptic behavior was even more difficult to understand than usual. What, exactly, was his plan, and why did he go about it the way he did? One fan theory suggests he wanted to turn his own devotee against him.

Reddit user AndrewBurt120 offers an intriguing interpretation of Palpatine's underlying plans for Kylo Ren. Knowing in hindsight that Palpatine wanted Rey to kill him, thereby allowing him to inhabit her body, it stands to reason that plan A was for Palpatine to do the same with Kylo. However, that initial plan was foiled by Leia's interference.

Kylo's inner turmoil is the key to Palpatine's plan. The Emperor articulated this pretty clearly with his eerie declaration, "I have been every voice you have ever heard inside your head," when Kylo first arrived on Exegol. Manipulating Kylo to kill Rey would compound the guilt he still feels about Han's death, and would likely drive Kylo to turn against Palpatine. He'd presumably return to Exegol and kill Palps out of revenge, allowing his body to be completely overtaken by the Sith Lord.

This would mesh with Palpatine's known method of manipulation. Just like with Anakin, he doesn't force people to do anything, but convinces his victims they want the same things.

Palpatine is conniving, and even if this plan didn't work out and he switched to focus his efforts on getting Rey to kill him instead, this theory would show the kind of 4D chess Palpatine was playing with his schemes, always planning three steps ahead and having a contingency in case it doesn't work out, as it obviously didn't during the fight within the ruins of the Death Star.

Using the guilt from his father's murder is a brutal but effective way to use Kylo's emotions against him. Emotional abuse like this is in common in cases of brainwashing, so it makes sense a charismatic leader like Palpatine would employ something like this against the young Ben Solo, stoking his anger and guilt to get him to turn on his own Master, not knowing it's all part of the plan.

No matter what Palpatine's plan truly was, we can all at least rest assured it was defeated, though who knows what the future may bring.

The Rise of Skywalker is now streaming on Disney+.