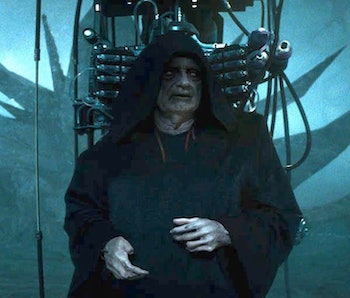 With Emperor Palpatine’s return revealed long before Star Wars: The Rise of Skywalker's theatrical release, the summer and fall of 2019 were rife with speculation regarding how exactly the villain would make his comeback. Every theory imaginable made its way online. Episode IX and the film’s subsequent novelization by Rae Carson confirmed Sheev's revival was due to an elaborate cloning process that began at the exact moment of his death in Return of the Jedi. The reveals just keep on coming, and the latest from the newly released Rise of Skywalker novelization seems to hint at another major Palpatine twist.

After Darth Vader hurled him into a pit in the Death Star II at the end of Return of the Jedi, Palpatine was presumed dead. Even if he had somehow survived the fall, the floating fortress was blown to smithereens shortly thereafter.

Even so, The Rise of Skywalker: Expanded Edition confirmed Palpatine’s essence was rescued by the Sith Eternal, the eerie cult seen chanting and clapping inside the icy throne room on Exegol. Though he survived, Rey was able to beat him once and for all, using the strength of the Force and the combined strength of all the Jedi to defeat him. Or so we thought.

Reddit user CirUmeUela theorizes that the novelization hints Palps could return. Following the Battle of Exegol, Poe and Finn return to base and the latter wonders if the former emperor could return again. It’s a legitimate question, considering he was resurrected once before. Here’s the passage from the novel:

“General Leia thought they'd destroyed the Emperor at the Battle of Endor,” Poe said. “But he came back. More powerful than ever.”

“You think he might come back again,” Finn said.

“Maybe. Or some other evil will rise. Evil always rises.”

The passage doesn't directly state that Palpatine will be back, but it leaves open the possibility. After all, this is the same villain who spent decades in hiding, was cloned in secret, and drew upon the Force and all the unnatural Sith methods to find Rey and rule the galaxy more powerful than ever. While it definitely seemed like Palpatine’s second death was final, members of the Sith Eternal may have survived and they could be gearing up to clone the wily Sheev all over again.

While another resurrection might be a long shot, Finn’s comments suggest that Palps could return decades – or even centuries – down the line. In short, it’s no longer their problem. Of course, the passage could also be interpreted differently. Either way, Palpatine’s unexpected return in Episode IX will hopefully ensure that the Resistance will be better prepared should another evil arise in the foreseeable future.

Star Wars: The Rise of Skywalker: Expanded Edition is out now.