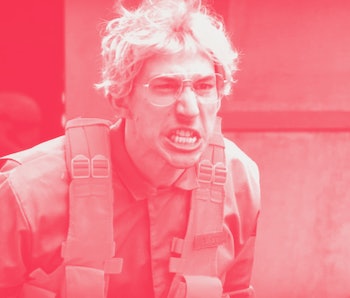 When The Rise of Skywalker premiered, I was on the frontlines of angry fans demanding an explanation for how Emperor Sheev Palpatine could return after his apparent death at the end of the original Star Wars trilogy. I was so naive.

"Shoehorning the Emperor into the plot requires a fair amount of suspended disbelief — even for Star Wars," I wrote in Inverse's Rise of Skywalker review. "Anyone hoping for concrete details around the character is going to be disappointed, at least until Lucasfilm fills in the gaps with future novelizations, comics, Disney+ shows, narrative podcasts, and augmented reality experiences at Disneyland."

In a sense, I was right. While The Rise of Skywalker never explained how Palpatine survived or how he managed to procreate and become Rey's grandfather, an upcoming novelization of the Star Wars movie that's been leaking all over the internet holds all those answers and more. The only problem is, most of these answers are really, really dumb.

Did you know that Palpatine was actually a clone the entire time? Or that he used the Force to escape his plummeting body in Return of the Jedi moments before death? Or that Rey's dad was actually a failed Palpatine clone without any Force sensitivity? Well, now you do, and according to Disney, all those details are as much a part of the canon as anything that happened in the core movies.

You might think this would make me happy. After all, I complained that Palpatine's role in Rise of Skywalker was never explained, and now I'm getting exactly what I asked for.

I'll admit it: I was wrong.

What this new Star Wars novelization proves is something true fans have known all along, the best part of Star Wars is the empty spaces your imagination can fill in.

When Obi-Wan Kenobi first mentioned the "Clone Wars" back in A New Hope, audiences were given just enough detail to imagine an epic conflict unlike anything seen before in science fiction. By the time the prequels got around to actually showing us the Clone Wars, we'd learned the entire conflict was actually just a prolonged dispute over space taxes.

Similarly, the best moments in The Rise of Skywalker were the ones that didn't worry about filling in every little detail: Lando Calrissian's sudden appearance, Rey and Kylo's epic lightsaber battle on the inexplicably preserved Death Star wreckage, Ian McDiarmid hamming it up as Palpatine. These moments work because we know less, not more, about why they're happening. This novelization could undo the most memorable parts of the movie.

If Rise of Skywalker is like the original trilogy (which is a huge stretch, but stick with me) then this novelization is the prequels, filling in every unwanted detail and demanding that Star Wars fans pay attention as it somehow makes what was already a mediocre movie even worse.