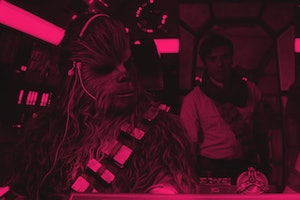 The Star Wars universe has expanded well beyond the films to include video games, novelizations, and comic books. Collectively, the multitude of stories offers a better understanding of the galaxy far, far away and fills in the gaps left behind from the films. During the climactic final battle against Emperor Palpatine in Rise of Skywalker, several ships popped in to help out the Resistance. However, while the scene didn’t confirm who had actually shown up to assist, the Rise of Skywalker novelization by Rae Carson reveals three secret cameos from the Battle of Exegol.

Warning! Spoilers ahead for The Rise of Skywalker novelization.

While Rey faced off against her grandpappy Palpatine, war was waging outside. Above ground, Poe Dameron, Finn, and the underutilized Rose Tico were under attack from the Sith Troopers. Overwhelmed and on the brink of being overtaken, the Resistance was facing certain death. It was only when a bunch of ships suddenly showed up to help, including Lando Calrissian in the Millenium Falcon, that the tide of the battle shifted.

While these ships were hard to differentiate from one another, a passage from the Rise of Skywalker novelization (via Reddit) confirms the identities of numerous characters who showed up from across the galaxy.

Perhaps none is more interesting than starfighter pilot Zay Versio. First introduced in the Star Wars Battlefront II video game, Zay is the daughter of defected Imperial soldier Iden Versio. Following her mother’s death, Zay carries on her work and proves incredibly important to the Resistance’s mission during the events of The Last Jedi.

Following the destruction of the Starbase Killer, General Leia Organa tasks Zay Versio with rounding up allies from the Outer Rim Territories to aid in the fight against the First Order. While Zay never actually appears in The Last Jedi, she is indirectly mentioned in the official novelization. As the pilot of the Inferno Squad, Zay’s confirmed appearance in the pages of The Rise of Skywalker: Expanded Edition reveals that her mission was a success and provides an integral connection between Episode IX and Battlefront II.

There are a couple of other cameos worth mentioning. The novelization also confirms Kazuda Xiono, a pilot and former Resistance spy, he was recruited by Poe for a mission in the animated show Star Wars Resistance. In the Expanded Edition, the pilot is heard checking in over the comms, having brought the Fireball crew with him, a racing team put together on the fueling station Colossus. Another voice chimes in to tell Kazuda to “cut the chatter,” and it seems that person was none other than Poe.

What’s more, the Alphabet Two crew from the novel Star Wars: Alphabet Squadron is also involved in the Battle of Exegol. The book is set in the aftermath of Return of the Jedi and follows a group of New Republic pilots tracking down an Imperial group called the Shadow Wing. The novel is part of a trilogy, the first of which was released in June 2019.

While it seems none of these characters appear elsewhere inThe Rise of Skywalker novelization, their cameos are further evidence of the intricate connections within the Star Wars universe.

The Rise of Skywalker: Expanded Edition is out now.