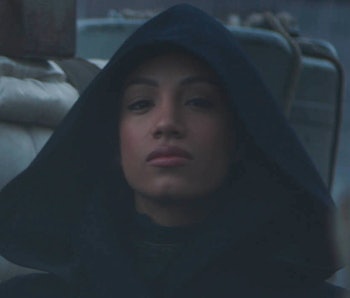 ‘Tis the season for The Mandalorian and Baby Yoda. The Season 2 trailer dropped this week and offered fans with plenty of new footage, and Mando officially became a working parent, carrying Baby Yoda (officially known as The Child) in a satchel while he beat up people in his search for the Jedi. While the pair were a welcome sight, it was an unknown hooded figure who piqued our interest.

In the trailer, the mystery character can be seen watching Baby Yoda and Din Djarin before sneaking back into the shadows. The woman in question is WWE star Sasha Banks. Rumors previously swirled that Banks might play the live-action iteration of Sabine Wren, the acclaimed Mandalorian warrior from the animated Star Wars Rebels. If true, it's a pretty big deal.

Sabine is a prominent character in Star Wars lore. Here’s a refresher on who she is and what her role in The Mandalorian Season 2 could be.

Who is Sabine Wren in Star Wars?

Voiced by The Good Place’s Tiya Sarcar in Star Wars Rebels, Sabine is a rebel who ultimately fought to free the planet of Mandalore from the Empire’s rule. Before all that, however, she attended the Imperial Academy of Mandalore but dropped out to become a bounty hunter. She left that life behind too and joined the crew of Ghost, a light freighter, as an engineer, weapons, and demolition expert. She and the crew were a part of the Resistance and fought against the Empire.

The first weapons Sabine built, unfortunately, fell into the wrong hands and were ultimately used against her people. That led her to be shunned by her mother, which strained their relationship for some time (they later reconciled). However, she became a true Mandalorian legend through her art and for later wielding the Darksaber, the ancient black-bladed lightsaber that was last seen in Moff Gideon’s hands in The Mandalorian’s Season 1 finale.

What will Sabine Wren’s role be in The Mandalorian Season 2?

It’s hard to say at this point, but considering that Sabine is a Mandalorian and a rebel, it’s possible that she’s been tracking Din Djarin to lead him to the Jedi. Considering the show takes place after Return of the Jedi, Sabine has already linked up with the good guys and it’s possible that she’s there to help bring Mando and Baby Yoda to a safe haven. After all, there are way too many people who are after The Child and he must be protected at all costs!

What’s more, fan speculation suggests Sabine is the daughter of Obi-Wan Kenobi and thus has the potential to become a Jedi. That theory could come to fruition here, making Sabine’s role even more crucial. However, not everyone has to be a Jedi, and Sabine is a fierce warrior and protector on her own. Her wielding the Darksaber before means that she could take the weapon back from Gideon, who mysteriously got a hold of it. Aside from assisting Din Djarin, helping to defeat Gideon may be her biggest storyline in Season 2 and it's possible they will battle each other — assuming they haven't already.

Will Sabine and Ahsoka Tano be working together in Season 2?

We know Ahsoka is expected to show up in The Mandalorian Season 2, so it would make a lot of sense for Sabine to be by her side as well. At the end of Star Wars Rebels (set between the prequels and the original trilogy), Sabine and Ahsoka departed on a journey together to find Ezra, a fellow rebel and Jedi-in-training. It’s possible The Mandalorian Season 2 will finally reveal if they were successful or if they went their separate ways. Either way, Ahsoka’s reported jump from animation to live-action bodes well for Sabine to follow in her footsteps.

The Mandalorian Season 2 will premiere on October 30 on Disney+.