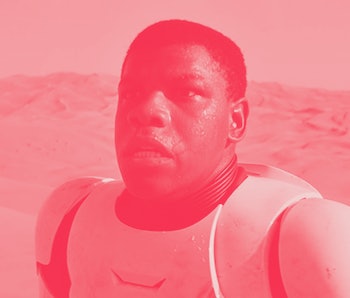 John Boyega hasn't exactly been quiet since the release of Star Wars: The Rise of Skywalker. He's tweeted Star Wars memes and poked fun at the plot on Instagram, while also speaking out about racial injustice at a Black Lives Matter protest earlier this summer. But ever since Episode IX hit theaters to mixed reviews, Boyega hasn't sat down with a journalist to share his feelings about the movie and his experience with Disney and Lucasfilm in general. Until now.

In a conversation with GQ UK, Boyega discussed getting sidelined in The Last Jedi and called out Disney for mistreating the franchise's POC characters while "they gave all the nuance to Adam Driver, all the nuance to Daisy Ridley." Without going into specifics, Boyega is undeniably right, and for all it's pros, The Last Jedi squandered Finn with a fun-but-meaningless B plot.

But what Boyega said about J.J. Abrams and The Rise of Skywalker might be even more interesting:

"Everybody needs to leave my boy alone. He wasn’t even supposed to come back and try to save your shit”

There's a lot to unpack here. First, Boyega is clearly defending Abrams from criticism of The Rise of Skywalker, which many Star Wars fans argued felt half-baked and probably could have used a few extra months of reshoots and editing. The actor is also pointing out that Abrams wasn't originally tasked with ending the trilogy he launched. That job initially belonged to Colin Treverrow, who was fired by Disney for unclear reasons. (After The Rise of Skywalker's release, Treverrow's unused script leaked, and most fans agreed it was way better than what we got.)

Of course, Boyega also owes his career to Abrams, who presumably played a key role in casting the parts of both Finn and Rey. Boyega was already a known quantity before then thanks to Attack the Block, but Star Wars boosted him into the stratosphere.

Ultimately, we'll never know whether Star Wars: Episode IX would have been any better if Treverrow was never fired or if Disney gave Abrams an extra six months to finish it. But, again, it's hard to argue with Boyega here. J.J. did Disney a big favor by doing a job that was never supposed to be his to begin with, and maybe if The Last Jedi hadn't totally sidelined Finn in the first place, the character wouldn't have felt like such an afterthought in The Rise of Skywalker too.