“The Multiverse is a concept about which we know frighteningly little.” 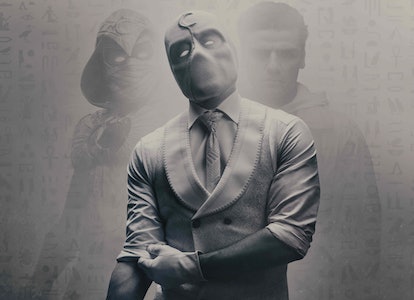 For Marvel fans trained to hunt down Easter eggs in every screenshot, Moon Knight may come as a sobering surprise. The latest Disney+ show is shockingly insular. In the first four episodes, no one mentions Thanos or wonders who will lead the Avengers now that Captain America and Iron Man are gone. If it weren’t for the Marvel Studios logo, you might think this was a standalone new series. However, one overlooked clue could reveal an MCU connection hiding in plain sight.

The Marvel Cinematic Universe seems to be converging on a single real-world location, and it could reveal a surprising connection between Moon Knight and Doctor Strange in the Multiverse of Madness.

When Marvel released the first trailer for Doctor Strange in the Multiverse of Madness, fans were quick to point out that the futuristic building where a shackled Stephen Strange is brought to presumably meet the Illuminati looks a lot like the British Museum in London. (The fact that Doctor Strange 2 was filmed in London only makes it more likely that scenes were shot in the museum.)

For comparison, here’s a photo of the actual British museum. Notice the big round structure with similar window and staircase placement?

On its own, that might not mean much (besides the fact that Marvel Studios is branching out from the same Atlanta hotel it always uses for cool building interiors). However, in the context of Moon Knight, things start to get interesting.

The premise of Moon Knight is that Oscar Isaac plays a museum gift shop employee named Steven Grant — until he discovers he’s just one of multiple split personalities. The show never makes it clear what museum Isaac works at, but it looks a lot like the British Museum.

Here’s a screenshot from the trailer:

And here’s the exterior of the actual British Museum:

For what it’s worth, there’s no indication that Moon Knight was actually filmed in the British Museum. According to another report, the building seen in the show’s trailer is actually the Museum of Fine Arts in Budapest, Hungary (another pivotal Marvel location). However, the point remains that Moon Knight seems to be implying its protagonist works in the same museum where a very important scene from Doctor Strange was filmed.

Finally, one more piece of evidence to drive home this connection. The London premiere of Moon Knight took place at, you guessed it, the British Museum. For fun, here’s a photo of Oscar Isaac wearing a kilt at the event.

So why does any of this matter? Well, it might not. This might all be a coincidence with no in-universe implications. But considering that Moon Knight’s season finale releases two days before Doctor Strange in the Multiverse of Madness, that seems unlikely.

Maybe Moon Knight will end with its lead superhero sucked into the multiverse on a mission to help the Illuminati? Or maybe Doctor Strange will show up at the museum looking for help from Steven Grant to decode some ancient Egyptian spell.

Before you go, I have one more theory that’s so wild it’s almost certainly wrong, but is also too fun not to consider. What if Moon Knight doesn’t take place in the MCU at all? The show could be set in another pocket of the multiverse where the Avengers and Thanos never happened, which would explain why no one mentions them in this show.

If that’s the case, perhaps Moon Knight will end with its hero being pulled into the MCU we know and love, setting up interactions between Marvel’s other superheroes and an extra-confused version of Marc Spector/Steven Grant.