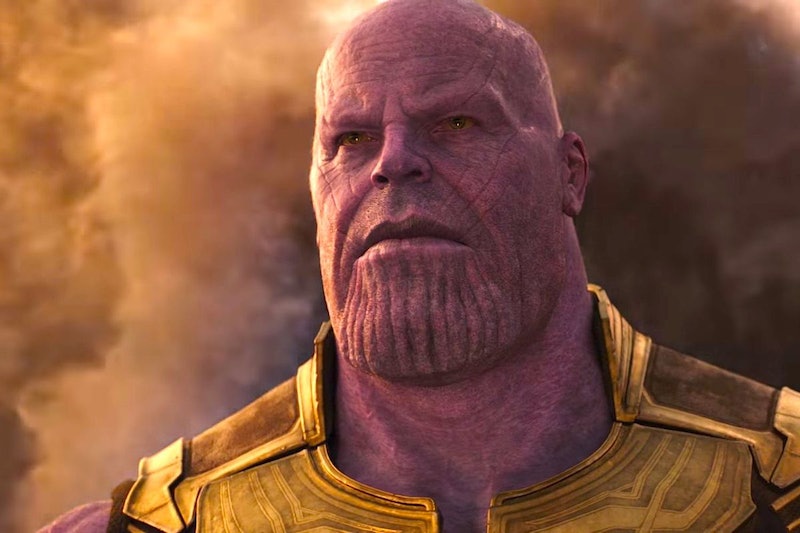 More than two years after Avengers: Endgame, we’re still obsessed with Thanos. The Mad Titan’s brief cameo in What If...? stole the show, while the plot of The Falcon and the Winter Soldier revolved around the aftermath of his Snap. So, it’s no surprise that Marvel’s newest show, Hawkeye, references the purple supervillain too.

Hawkeye isn’t about Thanos — at least not yet — but one small moment in Episode 1 brings the Mad Titan back into the conversation. While it might seem like an unimportant Easter egg, this scene completely changes how we should think about Thanos in the MCU moving forward. And maybe not for the better. Extremely light spoilers for Hawkeye Episode 1 ahead.

What happened — In Hawkeye Episode 1, Clint Barton takes his kids to see Rogers, an in-universe musical based on the life of Captain America. (Spoiler alert: it stinks.) Clint ducks out to use the bathroom, where he encounters the words “Thanos was right” scrawled in thick black letters on a urinal.

It’s a brief moment that Hawkeye barely addresses. Clint notices the message and shrugs before moving on. It’s as if the show needs to remind us we’re still in the same MCU before it can tell a new story. But it matters more than you think. Here’s why.

The Inverse analysis — Thanos was right has been a meme in the real world ever since the Mad Titan snapped his fingers onscreen. It’s a cynical play on similar jokes about certain historical figures, but it also speaks to one of the strengths of Thanos as a character: It’s possible to empathize with him even when his goal is wiping out half of all life in the universe.

However, it’s one thing to joke about Thanos being right in the real world, but it’s another to imagine that civilians in the MCU feel the same. You’d have to be extremely cynical (or unhappy) to think the Snap was a good idea. Even the villainous Flag-Smashers in Falcon and the Winter Soldier never went that far (and their whole thing was being mad at all the Snapped people who came back in Endgame).

It may not seem like a big deal, but if Marvel wants to move past Thanos and establish a new big bad (whether that’s Kang the Conqueror or someone else), it needs to be clear that the MCU has moved past Thanos as well. Otherwise, we might as well bring him back to fight the good guys in Avengers 5.