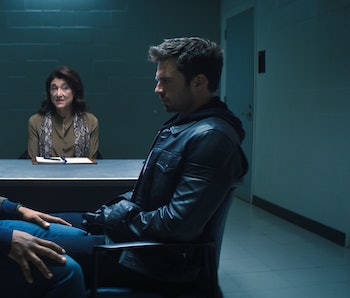 The Falcon and the Winter Soldier should have been a turning point.

After WandaVision saw Wanda Maximoff process her grief by holding a town hostage, The Falcon and the Winter Soldier opened Bucky’s story by having him talk to a therapist. It finally seemed like the Marvel Cinematic Universe’s greatest heroes were going to focus on their mental health.

But that session didn’t go as planned. In fact, it may have made Bucky’s mental state worse. Thankfully, Marvel reaffirms that its most troubled characters can find healing, in the most unlikely of places: an alternate universe. Here’s how What If...? Episode 2 fixed everything.

The second episode of What If...?, Disney+’s new animated anthology series, is bittersweet in a number of ways. Firstly and most crucially, it features the final performance of Chadwick Boseman as T’Challa/Black Panther, which is objectively heartbreaking to consider. And yet the late actor delivers such a wholesome energy to his version of a lovable Star-Lord dirtbag that it’s like watching Ocean’s 11 with Paddington Bear in the lead role.

And secondly, there’s Thanos. That’s right, the Big Bad of the Infinity Saga, Mr. Inevitable himself, appears as one of T’Challa’s heavies, facilitating a heist into the Collector’s vault.

This isn’t your regular Thanos, though. This alternate-universe version of the Mad Titan seems... well-adjusted? He credits T’Challa for showing him there are better ways to sort out one’s problems than mass genocide. And, yes, he keeps bringing up his supposedly genius idea to sort out galactic over-population. But as everyone reminds him: yep, that’s genocide.

But showing a redeemed Thanos in this branch of the multiverse has huge implications. Even if it’s played as a joke, the maneuver proves that even the most diabolical villains aren’t, at their cores, irrefutably evil people. They are simply misguided, undergoing huge amounts of trauma, and missing some key outside perspectives.

In The Falcon and the Winter Soldier, Bucky’s in a similar place. The amnesiac former assassin is dealing with a massive amount of unresolved pain and loss, trying to rebuild his life after (however briefly) becoming the villain. But his therapist merely admonishes him not to do anything illegal: treating the symptom, not the cause.

Mental health is almost villainized in The Falcon and the Winter Soldier, seen as a court-ordered inconvenience that keeps Bucky from his real mission in defeating the Flag Smashers. It’s arguably making a worse case for therapists than WandaVision, where a grief counselor could have possibly helped Wanda avoid creating the Westview anomaly.

But What If...? finally delivers the message so many people deserve to hear: no matter how inevitable your worst impulses may feel, doing the work to improve your mental health is always worth it.