“I still think I could maybe move the world that one millimeter.” 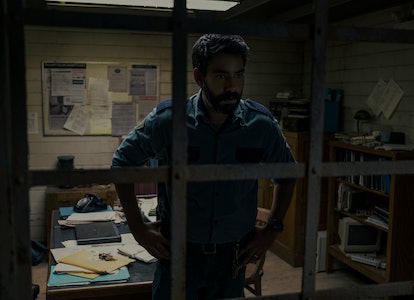 Small towns in television are often so comforting. The cozy charms and kooky residents of Stars Hollow (Gilmore Girls), Schitt’s Creek (Schitt’s Creek), and Mayberry (The Andy Griffith Show) cemented small towns as the ideal place to live for generations of audiences.

But remote Crockett Island, seen in Netflix’s Midnight Mass, isn't like those other towns. Its residents are anything but kooky, and its sheriff exists to make you rethink who actually gets to be the good guy. Enter: Rahul Kohli as Sheriff Ali Hassan.

In “Acts of the Apostles,” the sixth episode of Netflix’s horror-drama from creator Mike Flanagan, Dr. Sarah Gunning (Annabeth Gish) brings her valid concerns about the congregation of St. Patrick’s — and its strange new priest, Father Paul (Hamish Linklater) — to Sheriff Hassan. It’s then that Hassan opens up about the thorny politics of being Muslim in America, as a cop after 9/11, as a man in a Catholic village, and as a widower and father trying desperately to hold onto his faith.

Hassan presents a complex web of identities and paradoxical images. He’s the face of law enforcement, but he looks like what many in America would see a threat.

SCENE STEALERS is a countdown that salutes the unforgettable small-screen characters of the year. Sheriff Hassan is #1.

This is a role Rahul Kohli built his career towards. After appearing in comedies like iZombie and Harley Quinn, Kohli’s profile took off as pun-loving chef Owen in Flanagan’s previous Netflix series, The Haunting of Bly Manor. In interviews for Bly, Kohli alluded to Midnight Mass as “one of the best things” he’s ever read. Kohli didn’t take the job lightly. He dove into an intense process involving ride-alongs with the LAPD, studying Arabic, and researching Muslim philosophy. He gave Hassan the last name el-Shabbaz to honor Malcolm X.

Who is Sheriff Hassan?

I’ve had the pleasure of speaking with Kohli three times now, and each time I felt completely at ease. Kohli radiates genuine love for the characters he inhabits and the stories he tells through them. He has an enviable work-life balance that’s rare for an actor in a post-quarantine world. A glimpse of his Twitter and Instagram reveal an undying love of self-deprecating shitposting, trolling, and reverence for his beloved Liverpool Football Club and Star Wars.

This openness goes both ways. Just as Kohli is open to his fandoms, his fandom is open to him. It’s clear he pulls from their love of his work, collecting fan art and conversing with followers, even if it’s to put them in their place for being disrespectful. He makes it clear he hears every perspective of his audience, which then informs his performance.

All of this illustrates the platonic ideal for an actor. He commits to roles seriously to truthfully relate to them. But his natural openness as a person fosters empathetic performances, allowing viewers a welcome invitation into his soul. With a role so carefully guarded as Sheriff Hassan, it’s unthinkable to imagine anyone else threading the needle between nuance, vulnerability, and tenuous self-censorship.

Mike Flanagan is known for having characters spend long stretches of time musing on a specific topic. Hassan gets two such scenes to steal the show. In one, he retreads his past efforts to work against the systemic racism in the NYPD. The other, he exchanges words with zealous church leader Bev Keane (Samantha Sloyan) in a futile attempt to enlighten her about the role of Jesus in Islam. In challenging Bev over her Bible readings in school, Hassan insists he doesn’t have a problem with the Bible. He has a problem that she’s doing it in a public school.

At its core, Midnight Mass is a show haunted by Catholicism from a Catholic creator. Hassan plays a critical role in the bigger picture. He’s one of its few non-Catholics and exists to prove how one can be a person of faith sans evangelization or moral superiority. He only wants the world around him to be the best it can. In a town as devout as Crockett Island, it’s the Muslim man who shares more in common with Christ, while those who fall prey to Father Paul place belief above the well-being of their fellow man.

Sheriff Hassan exposes the elemental racism in small towns to the harsh light of the surface. Midnight Mass isn’t a cozy little place you find elsewhere on TV, and that’s a good thing. Having honest, uncomfortable conversations, and listening to each other, is our only hope in making those small towns of our television dreams closer to reality.