Rahul Kohli on 'Bly Manor,' using Twitter for good, and his next big role

“I don’t like being in the dark about social issues.” 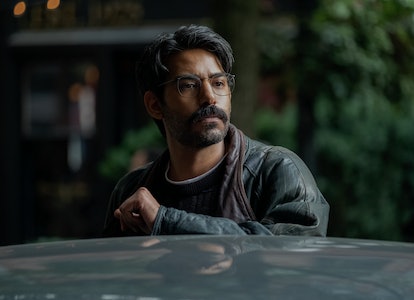 If you’re a fan of genre fiction, you know Rahul Kohli. While he got his start in the now-cult classic series iZombie, his career reached new heights this year. Against all odds, 2020 really seemed to be Kohli’s year.

A star turn in The Haunting of Bly Manor had the entire internet obsessed with affable personal chef Owen Sharma, and he recently wrapped production on Midnight Mass, another Mike Flanagan Netflix series. But Kohli tells Inverse that Owen's popularity took him by surprise.

“It kind of showed me that I don't really know what audiences like," he says. "I was completely surprised by how people took to the character.”

“One of the best things I’ve ever read.” — Rahul Kohli on Midnight Mass

He’s used that lesson in his new role in Midnight Mass, too. “You never really know what, what works, what doesn't. There's so many things you can't calculate. So I don't worry so much about the final product, just worry about the character in the moment.”

His role as Owen was one of those things that couldn’t be calculated. Overnight, fancams set to bubblegum pop songs flooded timelines, and the phrase “In Paris I was a sous-chef which means they only let me chop vegetables” became a fledgling meme in its own right.

Outside of acting, Kohli is also known for his impressive Twitter presence. In between tweeting about video games and Liverpool Football Club, he interacts with fans regarding his work and others’, delightfully blurring the line between fan and creator.

Thankfully, this same blur doesn’t exist in his life. Kohli has achieved what the vast majority of people who work in the arts try for their entire lives — a healthy work-life balance. “My job's my job, and I just commit to what's asked of me and the character,” he says. “I don't try to do anything that's fan service. The way I talk to people on Twitter hasn't changed since before iZombie. It's just the banter I've always had with people.”

His fans aren’t just limited to his large Twitter following. Kohli says Mindy Kaling and Pedro Pascal both praised his performance in Bly Manor. Pascal’s praise is especially relevant, as Kohli is a massive Star Wars fan. When informed that Owen was beaten in Inverse’s Scene Stealers poll by The Mandalorian’s Frog Lady, he confessed he would have voted for her too.

Kohli’s love of Star Wars runs deep. He previously told Inverse he’s spent more time practicing lightsaber combat in his backyard than acting, and when asked a day before The Mandalorian Season 2 finale, he correctly predicted Luke Skywalker would make an appearance — though he liked the theory of Mace Windu returning.

This kind of fan engagement is evident on Twitter, where he expresses interest in playing all sorts of roles, from Star Wars: Rebels protagonist Ezra Bridger to Reed Richards (aka, Mr. Fantastic) in The Fantastic Four. Aside from prompting some really cool looking fan art, this fancasting serves a larger purpose: prompting people to start thinking about the characters they love as being played by people of color.

“I genuinely think that it's not so much that there's an agenda to not have a diverse cast, there’s just a lack of thought,” Kohli says. “You have to kind of go out of your way to go, ‘I'm going to make sure that this character is a person of color.’” This is especially true for large fandoms like superhero movies. “The default, I always feel, unless it’s expressly stated in the literature, is that the character is white.”

By using his platform, his enthusiasm for the characters, and his increasingly recognizable image, Kohli is fighting against these defaults. Fancasting himself offers a casting choice that, however hypothetical, opens fans’ minds as to what their beloved characters look like. Who knows, maybe a Marvel exec will see the fan reception and have their mind opened as well.

Fancasting isn’t the only way Kohli has used his platform. Earlier this month, he caused a stir for putting his pronouns in his Twitter bio. Cisgender people putting their pronouns in their bio normalizes the process for everyone, and makes it easier to communicate with strangers on the internet.

Where did this choice come from? “Ignorance, if I’m going to be honest,” Kohli admitted. “No one knows everything. I don’t like being in the dark about social issues, so when there’s something that I don’t understand, I try to educate myself.” After seeing other people using pronouns in their bios, he read GLAAD’s guide on how to be a better ally. “It explained to me pretty simply why cisgender folk including their pronouns in their bios helps normalize it. I realized something as simple as that can be so beneficial to the trans, non-binary, and genderfluid community. So I thought, yeah, I would be happy to do that.”

Though he received some pushback for these decisions, he knows it’s just one step in the right direction. “Being a fan of video games and football and Star Wars, I attract that same audience,” he says. “And I thought that myself doing that could influence those communities too, or at least open up a dialogue about it.” Conversations about new practices like stating pronouns may be difficult, but they’re easier when they’re with someone people admire.

Kohli spoke to Inverse just a day after wrapping filming on the upcoming series Midnight Mass, while driving from Vancouver her filmed back to his home in California. While not much is known about the series’s plot, it’s already noteworthy for another reason — it filmed in a pandemic over 83 days without a single Covid-19 scare. After filming Bly Manor, Kohli was excited to work with Mike Flanagan again, and it’s obvious he wasn’t the only one.

“It was heartbreaking. There are obviously much more important things in the world than television shows right now. But it was heartbreaking to see Mike's dream project kind of slipped through his fingers through no fault of his own,” Kohli says. “And I think that was one of the biggest reasons why everyone just sort of knuckled down and just really kind of gave it their all. We did that for the love of the project, for the love of Mike.”

With Midnight Mass, which Kohli calls “one of the best things I’ve ever read,” now entering post-production, it’s obvious the kitchen of Bly Manor is far from the last scene Kohli is poised to steal. Whatever roles he finds himself in next, he’ll be sure to approach them with his trademark wit, commitment, and enthusiasm that makes him a universal fan favorite, no matter the fandom.