“Remember you are dust, and to dust you shall return” 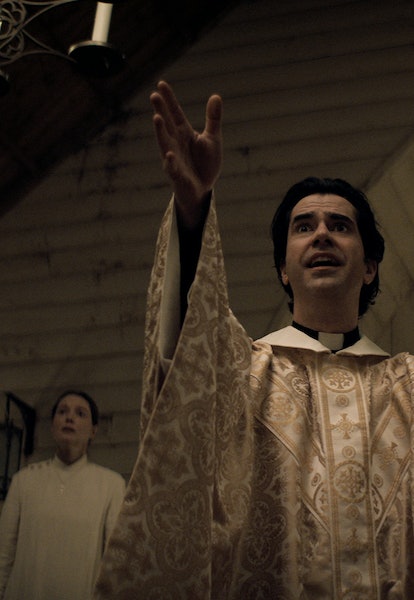 Growing up Catholic is a difficult experience to describe.

From the moment you’re born, you’re told you’re a sinner. In fact, the very purpose of baptism is to rid your infant self of the original sin you were born with, a consequence of Adam and Eve.

From there, you strive daily to be Christlike, to avoid sin and all that leads to sin. But that’s a lot of pressure for a young person, and no matter whether a person stays within the church, this upbringing leaves an indelible mark.

That mark permeates Mike Flanagan’s latest series for Netflix: Midnight Mass, a passion project for the horror filmmaker behind The Haunting of Hill House.

Anticipation has been high for the series, which premieres on September 24. Flanagan has called it his “favorite project so far,” and star Rahul Kohli has spoken of it in similarly rhapsodic tones. As a critic fascinated with both Catholicism and Flanagan’s past work, I’m happy to add my voice to that choir.

The series opens as Riley Flynn (Zach Gilford), a former altar server from the remote fishing village of Crockett Island, suffers a horrible tragedy: a car accident he can’t help but blame himself for. After getting sober and spending years in prison for manslaughter, Riley returns to Crockett Island, where life is exactly how he left it in his close-knit community, which remains centered around St. Patrick’s Catholic Church.

But Riley isn’t the only new arrival on Crockett Island. Father Paul (Hamish Linklater) arrives to replace longtime priest Monsignor Pruitt, who fell ill on a pilgrimage to the Holy Land. As the series progresses, Paul and Riley struggle to find their footing in such an insular community, but each finds a form of solace in isolation. By the series’ end, they both deal with their own secrets — and their own “blessings,” in opposite ways that, to the viewer, still make perfect sense.

Though the series struggles with pacing at the outset, depicting the leisurely existence of residents around the “Crock Pot,” the action slowly — almost imperceptibly, like a frog in slow-heating water — ramps up to a full-on scorched-earth battle between the faithful and the skeptics.

I asked my mother to watch the first episode of Midnight Mass with me, hoping her years of Catholic school and Sunday school teaching would provide some insight. Immediately, during the scene showing Father Paul’s first Mass, she knew something was wrong.

“He’s got the wrong color of chasuble on,” she said, speaking over the processional hymn. “She said it was Ordinary Time, so he should be wearing green.”

Sure enough, this discrepancy was pointed out by overzealous Bev Keane (Samantha Sloyan) just minutes later. Across Midnight Mass, Flanagan painstakingly replicates what growing up Catholic feels like, from the off-key singing to the lighting of the incense and everything in between. He knows this world well enough to warp it gradually.

It’s no coincidence that the series names each episode after a book in the Bible. These aren’t just symbolic titles. Each is explained thoroughly throughout a given episode, beginning with Genesis and, of course, ending with Revelation.

Also intentional is the time that elapses across the seven episodes. We see the last Sunday of Ordinary Time with an almost empty church, and then as Ash Wednesday and the Lent season take place, the congregation picks up interest, especially once miracles start occurring. Just as Easter is the peak of the Liturgical year, it’s also the peak of Flanagan’s narrative.

If there’s one thing that’s made clear in Scripture, it’s that the Lord giveth and the Lord taketh away. No miracles come without a price. How much would you be willing to sacrifice to witness or be granted a miracle? Would you sacrifice your humanity itself? It’s these conundrums Midnight Mass sets out to answer.

Why do people seek religion? Sometimes, it’s to find a purpose, as in the way Bev Keane lets the Church consume her life. Sometimes, it’s for comfort, like how paralyzed Leeza (Annarah Cymone) uses faith to come to terms with her lot in life. And sometimes, it’s for answers to the big questions: who are we? Why were we put on the Earth? What happens when we perish?

Any ghost story, naturally, reflects on what happens after our lives end. But in Midnight Mass, passing is not seen as the dreaded end of a long life, but as merely a transition to the life we are supposed to lead. This life, and this body, is temporary, according to Catholic teachings.

Unfortunately, this wide scope can backfire. In Midnight Mass, these conversations drive the sci-fi action to a screeching halt as the characters discuss existential topics that by their very nature are imaginary. We don’t know what Heaven looks like, so all we can do is watch them speculate. It’s a great showcase of the cast’s acting talents, but it doesn’t make for thrilling television in the way other parts of the series do.

Long monologues are delivered by various characters discussing their faith. Whether it’s rational but faithful Erin Greene (Kate Siegel) discussing the afterlife, Muslim Sheriff Hassan (Rahul Kohli) reflecting on the Bible’s place in his faith, or now-Atheist Riley Flynn describing the rush of chemicals his brain will release the moment his life is snuffed out, Midnight Mass makes these conversations the center of its message.

More Things in Heaven and Earth

There’s plenty I could say about Midnight Mass as a cradle Catholic, as a supernatural television enthusiast, and as a lover of small-town ensemble shows, but that would cross into spoiler territory. Yes, the first episode crawls by depicting the mundanity of this ensemble, but by the end, you’ll be rooting for them as they fight for their lives.

Even in the first episode, it’s obvious just how beautiful the series looks. Episode 2 begins with a long tracking shot, following the characters in a choreographed sequence that feels like a cross between a stage play and The West Wing. Other shots use Dutch angles and sudden cuts to communicate dream sequences or use traditional religious art forms like woodcuts to illustrate anecdotes.

Underneath all the artistic symbolism, Midnight Mass is still horror. If you’re jump-scare-averse as I am, rest assured the shocks in this series are limited to the occasional face in a window accompanied with a musical sting. While Hill House focused on the inherent scariness of memory and Bly Manor focused on grief, Midnight Mass leans on the terrifying prospect of a higher power — and that doesn’t necessarily mean God.

Because of this new, larger focus and Mike Flanagan’s personal connection with the topics involved, I found myself more scared by Midnight Mass than by the general creepiness of Bly Manor. Considering the wide acclaim that series found, that’s quite an achievement.

The music choices underline this throughout, with choral and haunting hymns. More than once, I found myself singing along, accessing memories of singing songs in Mass. I don’t even know how I remembered the lyrics, but there I was, singing “Nearer My God to Thee” with the residents of Crockett Island.

I can only speak about this series as someone with a deeply personal connection to its subject matter. But even if you were raised non-Catholic or non-religious, the moments in Midnight Mass that dwell on the human condition place it firmly in the company of, if not even above, Flanagan’s Haunting series.