“This is it. This is the moment you’ve waited for” 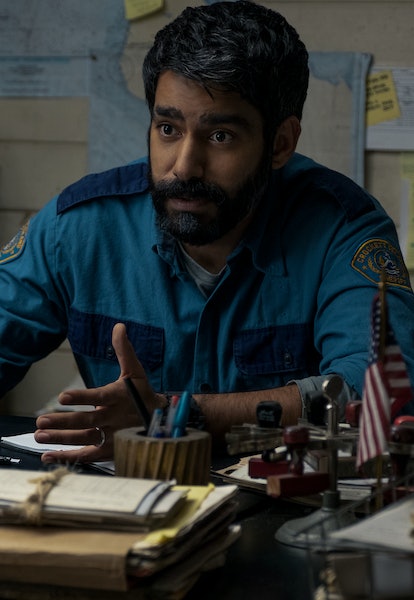 Rahul Kohli is going through a crisis of faith.

Unlike many of the characters in his new Netflix series Midnight Mass, he’s not having issues about religion. No, his crisis is over his dedication to Star Wars.

I’ve spoken to Rahul Kohli twice before, asking him about everything from those Ezra Bridger rumors to who would make a cameo appearance in The Mandalorian Season 2 finale. (For the record, he totally called it would be Luke Skywalker.)

But this time, when I ask if he’s seen the new Star Wars anthology series Star Wars: Visions, he says he didn’t even know it was out yet.

“No, I'm not that devout anymore,” Kohli tells Inverse. “That's probably what I can relate to Midnight Mass. I'm breaking away from the church of Star Wars.”

He gestures behind him to a glass display case full of Star Wars figurines and models. “I know it sounds ridiculous when this is my background, but I don't know. I feel myself pulling away. It's not for me anymore.”

For countless people raised in religion, this is a familiar feeling. It’s one that Mike Flanagan crystallizes in Midnight Mass with a terrifying sci-fi twist. People grow and change, but your upbringing is always a part of you.

In Midnight Mass, Kohli doesn’t play a character undergoing issues with his faith. His character, Sheriff Hassan, is just trying to be a good single dad for his son Ali and keep the small town of Crockett Island safe. Unfortunately, those tasks prove near impossible as an outside force wreaks havoc on the town’s church.

In conversation with Inverse, Kohli spoke about his intense preparation for this role, his complicated feelings about playing a sheriff, and the hidden meaning in Sheriff Hassan’s last name.

When we last spoke, you referred to Midnight Mass as “one of the best things you’ve ever read.” I was skeptical, but now I’ve seen it, I know exactly what you mean.

I don’t lie! I try not to. One of my brand things is honesty. My tweets and me, I am who I am. I’m never selling it. I’m on other projects; I don’t tweet about them. I don’t tell people to watch. If they find them, they find them. But when I care, I care. With Midnight Mass, from day one, I was like, “Everyone needs to see this.”

What was it about Midnight Mass that sparked this impression?

It was two things. While I was shooting Bly, Mike and I had a meeting together. Mike, for about 20 to 30 minutes, talked to me through Midnight Mass start to finish. It wasn’t through script form; it was Mike telling me the story. By the time he finished the story, I was like, “This is batshit crazy.”

Then he said, “I want you to play the sheriff.” I don’t know if he knew, but I’m obsessed with Westerns. I inherited it from my dad; he was a big Clint Eastwood and Sergio Leone fan. I couldn’t stand them as a kid, but when I got to a certain age, I was like, oh, these are dope. Deadwood, Red Dead Redemption. In my heart, I’ve always wanted to be a cowboy. I just knew that there would never be an opportunity to be one because why would I ever be a cowboy? I’m the wrong shade.

When he told me I was the sheriff, I was immediately like, yep, this is it. This is the moment you’ve been waiting for. I spent most of my time rewatching stuff. I spent a lot of time working on the Sheriff’s silhouette. The thing I love most about [the character] is that Mike took the quintessential American hero on screen, the sheriff, the John Wayne, and fused it with the post 9/11, quintessential American villain, brown bearded dude. That’s the sheriff.

I wanted to make sure that the sheriff moved and reminded you of what you used to think of the small-town sheriff, despite the fact that he looked like what would usually be the terrorist. That was the fun.

How else did you prepare for this role?

There were quite a few different things I had to research. In terms of the police side of things, I would go to gun ranges in my own time. I wanted to make sure I looked like I knew what I was doing. I went for a ride-along with the LAPD. We patrolled Hollywood, which was terrifying. I was hanging out with them and taking notes, and having conversations with them. They were super open and honest, and we had an interesting dialogue about a lot of things.

Then there was the Islam side, which involved a ton of conversation with my best friend, Mohamed. He’s been my best friend since elementary school, and he’s a devout Muslim. He ended up serving as a consultant on the show, as well as the Islamic consultant in the pre-production phase. Then on set, we had another consultant who served as my prayer and Arabic coach.

A week after I did the ride-along, George Floyd was murdered. And that already was like, oh, now I’m representing this thing that I take issues with. Then on top of that, I was researching Islam and America. It was a lot of 9/11 research. It was a lot of Nation of Islam research, which led me to Malcolm X at a time when we were talking about Black Lives Matter.

I remember I texted Mike, and I was like, “Hey, we don’t know what the rest of Hassan’s name is. He’s only ever referenced as Sheriff Hassan.” So I asked Mike if we could do this, and Mike had these props made. Sheriff’s full name is Hassan el-Shabbaz, and his son is Ali el-Shabbaz, and el-Shabbaz is Malcolm X’s full last name, Malcolm el-Shabbaz. I wanted to honor him and what he stood for. So that’s how I wrapped my head around playing this guy during all this stuff.

And then there was the accent. I was also doing dialect coaching with Jerome Butler. We were trying to craft something that was American but not specific. It wasn’t regionalized because we didn’t know where Hassan was from. You have to be an outsider. It was a really tough role, and I’m playing old. I was 34, and I’m playing a 40-something-year-old. It pushed me to my limits that I’d never crossed before as an actor.

Did you do any research into Catholicism, considering that factors so heavily into the series?

Catholicism is not completely alien to me. It’s fed to you at school. It doesn’t matter that one of my schools was predominantly Asian, Middle Eastern, Caribbean, African. We sang hymns. It was Muslim and Hindu kids singing “This Little Light of Mine” and “He’s Got the Whole World in His Hands.”

I didn’t research, but I also didn’t need to know. I could be ignorant to Catholicism in the show. There were a lot of things I did that separated me from the pack. I didn’t socialize with anyone. I didn’t get to know Rahul, who played my son. I clearly could have a good connection with this kid who was playing my son, but I chose not to.

But once we wrapped, I started talking to everyone and finding out that these people are hilarious, and I missed out on six months of fun. I deeply regret going to those lengths because it would have definitely enriched and improved my time filming.

It was a very lonely, depressing experience working on Midnight Mass because of the pandemic, because of how difficult I was finding the character, and the amount of work I was doing privately. Then on top of that, I wasn’t going home. I wasn’t flying back to Los Angeles because the borders were closed.

It was very tough, but it’s super rewarding. I loved the work, and I love the show. I think it was one of the best things I’ve ever seen or been in. So it all feels good now.