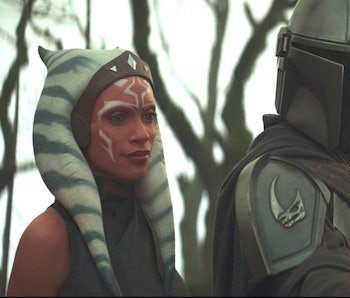 As much as toxic Star Wars fandom focuses their weird hate on the creative decisions behind the sequel films — The Force Awakens, The Last Jedi, and The Rise of Skywalker — these movies are part of the larger story of Star Wars, like it or lump it. Twenty years ago, Star Wars fans had to grapple with a similar truth when The Phantom Menace recontextualized the faraway galaxy in a way that not everyone loved. (Simon Pegg's character on Spaced famously burned his Star Wars toys in protest.)

These days the prequels aren't as hated as they once were, and the larger goal of those films — to explain the backstory of the classic trilogy — is still very much a part of Star Wars. From a certain point of view, the forthcoming Disney+ shows, including Mandalorian Season 3, are exactly like the prequels. Ahsoka, Rangers of the New Republic, and Mando Season 3 are all poised to fix the backstory of The Force Awakens and everything that came later. Here's why.

In a recent interview with the Writers' Guild of America, Mandalorian creator and Marvel stalwart Jon Favreau said: "The Mandalorian inherits a great deal from existing Star Wars stories, and when I write, that context is always a consideration. It became clear that, within the established continuity, certain things were likely to transpire."

This comment led to several websites speculating that Favreau had implied the events of the new Disney+ shows would eventually bump up against the canon of the sequel trilogy. Well, no duh. What's interesting about this interview with Favreau is that he admits openly, that explaining and elaborating on Star Wars continuity is an active component of how the stories are crated.

In Mandalorian Season 2, we saw a lot of this. Fandom questions like: "What happened to Boba Fett?" or "What's up with different Mandalorians?" or "Where's Luke Skywalker?" were not only addressed but incorporated into the major narrative thrust of the entire season. This may have made Mando Season 2 a little less accessible to non-diehards, but it's not like any Star Wars fan can say the show doesn't adhere to canon.

Still, adhering to canon and actively trying to explain it are two different things. And it feels like a larger Star Wars canon shakeup is underway. Disney and Lucasfilm have already said that a handful of these shows will tie together in some kind of crossover event. But what is that event?

The events of the sequel trilogy almost purposefully seem to avoid taking us to any planet with a huge population. In fact, the entire sequel trilogy largely avoids familiar planets, and instead, focuses on planets that are in the ass-end of space (Jakku) protected by corrupt criminals (Canto Bight/Cantonica) or straight-up hidden (Exegol).

This gives the sequel trilogy a strange emotional impact insofar as you never really feel like our heroes are going to the "center" of where all the people live, or where there's some kind of government power structure. The New Republic — located in the Hosnian Systems — the theoretical seat of power in this era, and is destroyed by Starkiller Base in like 5 seconds. After Starkiller Base is destroyed, we actually never get a sense of where the First Order has their headquarters. We have to assume Courscant because Kylo Ren mentions the archives of the Empire in The Force Awakens, but we don't actually know. (Colin Trevorrow's unused Duel of the Fates script would have taken the gang back to Courscant, but that didn't happen!)

Throughout the sequel trilogy, both the First Order and the Resistance tend to exist only on their ships and in their temporary bases. This makes the sequel trilogy a lot like the classic trilogy, in which the centralized base of the Empire was never visited, and the Rebels were always on the run. One thing the prequels did very well, was to put a face on the government and population of the galaxy, that the classic films simply couldn't. In A New Hope, when Tarkin talks about the Emperor dissolving "The Imperial Senate," the prequels gave that line more weight, cause we know what that looked like.

In The Rise of Skywalker, the big final battle is won over Exegol by what we're told is just ordinary "people" in spaceships, rising-up against the Final Order. But, who are those people? Where do they come from, where do they live? Why do they care?

Rangers of the New Republic, Ahsoka, and The Mandalorian Season 3 are actually poised to answer these questions in the same way the prequels made sense of the backstory of the classic films. The planet Mandalore is super-pivotal to galactic events and it seems like a sure bet we're going there in Mando Season 3. Ashoka Tano is the link between understanding how the Rebellion became the New Republic, and what happened to all those people who fought in the war who weren't related to the Skywalker clan. And finally, Rangers of the New Republic is actually, presumably, about people who are enforcing New Republic law.

If we're going to ever understand how the sequel trilogy happened, the new Disney+ Star Wars shows are taking the first steps. Thirty years after Return of the Jedi, there were still no Jedi, the government was really screwed up, and crime syndicates were more powerful than ever. It may seem a little unbelievable now, but by the time Rangers, Ahsoka and Mando are finished, the sequel trilogy might suddenly surprise us. It might actually make sense.

The Mandalorian Season 3 is expected to premiere sometime in 2022.