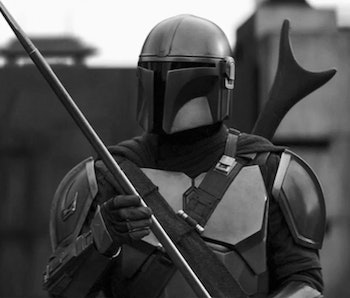 Mando has the Darksaber now, so does he still need that beskar spear? Hopefully, the answer is no, because a new theory suggests he might not hold onto the weapon for long. According to a compelling new theory, in The Mandalorian Season 3, Din Djarin could encounter a character from the Star Wars sequels — and it may not go very well for our beskar-clad hero.

The theory — TikTok user Caley Carpenter recently rewatched The Last Jedi and noticed something weird. Captain Phasma's weapon in the sequels looks a lot like the beskar spear from The Mandalorian Season 2.

And here's The Mandalorian again with the beskar spear:

You can probably guess where this is going. Caley Carpenter argues that at some point (maybe in The Mandalorian Season 3), Din Djarin will encounter Captain Phasma. She'll kick his butt and take the spear for herself. It's a fun theory, but there's one major issue: We already know a lot about Phasma's weapon, and it's not a beskar spear.

According to the Star Wars Visual Dictionary, Phasma wields a "quicksilver baton." This is a surprisingly high-tech weapon. According to Wookiepedia, "The baton's durable cylinder was made from a collapsible micromesh matrix held in a containment field." In other words, it's not just a spear made of really strong space metal.

Then again, there's a long history of Star Wars rewriting its own history through the use of retcon. So if Dave Filoni and Jon Favreau decide that Phasma's baton was actually Mando's Beskar spear that's good enough for us. (Fun fact: According to Star Wars canon, Phasma's armor isn't beskar either. It was actually made using scrap metal taken from Emperor Palpatine's old yacht.)

More important, bringing Captain Phasma into The Mandalorian could finally do justice to one of the coolest characters in the Star Wars sequels who never got their due. In the movies, Phasma is a faceless First Order captain who ends up losing pretty easily in a fight with the good guys, but this was a huge waste of Game of Thrones actor Gwendoline Christie and also of a very cool character...

Why Phasma belongs in The Mandalorian Season 3

Phasma grew up on Parnassos, a planet in the Unknown Regions that was colonized by a mining corporation. This ultimately led to a nuclear disaster that devastated what was once a green landscape. In this harsh environment, Phasma became a powerful warrior and leader of her clan's military. Her quicksilver baton is a high-tech nod to her warrior origins.

Phasma eventually joined the First Order after she met General Hux and helped him find his ship — betraying her family in the process — but it's possible she encountered Din Djarin before that happened. After all, Parnassos feels like the perfect location for a Mandalorian side-quest in Season 3, where Mando could help the locals in exchange for help before running afoul of Phasma and losing his spear in the process.

The timelines also seem to line up. We don't technically know Phasma's age, but Gwendoline Christie was roughly 40 years old when The Last Jedi came out. That movie takes place in 34 ABY, while The Mandalorian Season 1 was set in 9 ABY. So assuming Phasma was also 40 in the sequels, she'd be 15 (or maybe 16 or even 17) in The Mandalorian Season 3.

Encountering Mando would give Phasma a much more interesting backstory while giving her weapon in The Last Jedi a stronger connection to Star Wars history. It might be a stretch, but if anyone can do it, it's the team behind The Mandalorian — plus, a Season 3 spinoff series about young Phasma sounds awesome.