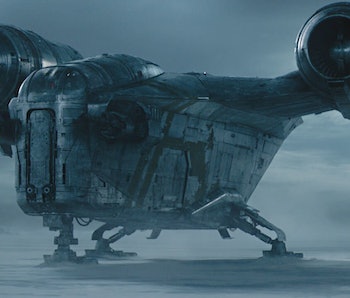 Mando's ship never had a chance. In The Mandalorian Season 2, the Razor Crest got torn up by giant spiders, crashed into the ocean, and was ultimately blown to smithereens by Moff Gideon's light cruiser. We never learned much about the ship, which Din Djarin once described as "pre-Empire surplus," but one eagle-eyed Star Wars fan may have spotted the Razor Crest's unlikely origin — or, at the very least, its inspiration.

Tik Tok user Anthony Venuti recently uploaded a video arguing that the Razor Crest actually shows up in one episode of the animated series The Clone Wars. The episode in question, Season 2 Episode 17, is titled "Bounty Hunters." (Fun fact: it also opens with a dedication to Akira Kurosawa, the Japanese director whose work inspired George Lucas to make Star Wars in the first place.)

"Bounty Hunters" follows Obi-Wan Kenobi, Anakin Skywalker, and Ahsoka Tano as they wind up on a far-flung planet that's being terrorized by space pirates. They soon encounter a group of bounty hunters (none of who are Mandalorians)that have been hired to protect a local village. After a brief misunderstanding, the two groups end up working together in what feels like a pretty non-essential episode of The Clone Wars.

However, the important moment comes at the very end when one of the bounty hunters, Sugi, offers to give the Jedi a ride home in her ship. As the episode ends, we see her ship. And it looks a lot like the Razor Crest.

But is that actually the ship from The Mandalorian? The timeline lines up since Mando said his ship was pre-Empire and that's when Clone Wars takes place. The fact that this ship was owned by a different bounty hunter before winding up with Din Djarin is also a nice bit of narrative symmetry. However, we're not convinced.

As Star Wars fans in the comments of Venuti's video point out, the two ships aren't totally identical. It's likely they came from the same manufacturer, but they're probably not the same model, let alone the same exact hunk of junk. For comparison, here's an image of the Razor Crest from the same angle, courtesy of Hasbro and Lucasfilm.

As you can see, there are some slight differences. The windshield layout doesn't match up, and those guns on the front of the Razor Crest aren't included on Sugi's ship.

Of course, it's possible that some changes were made over the year. In just two seasons of The Mandalorian, we saw the Razor Crest take a lot of damage. Maybe Mando's ship is actually the same one Sugi used to give Obi-Wan, Anakin, and Ahsoka a ride during the Clone Wars — but with a few major alternations.

Then again, if that was the case, wouldn't Ahsoka have mentioned something when she saw the ship during The Mandalorian? (To be fair, she was somewhat distracted by Grogu.)

At the very least, this clear visual connection feels like a deliberate nod to Star Wars past from The Mandalorian. And considering that the show's co-creator Dave Filoni also worked with George Lucas on The Clone Wars, we doubt it's just a coincidence.

You can watch The Mandalorian and The Clone Wars on Disney+.