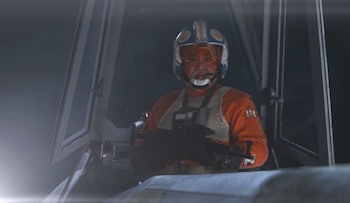 Getting pulled over is stressful. It's even worse when the cops are driving X-wing fighters. In The Mandalorian Chapter 10 — Episode 2 of Season 2 — the most heroic starship design in Star Wars will make you think more of a police car than an attack fighter.

When Mando gets pulled-over by two New Republic X-wings for not having the proper transponder identification, things get tense. But this plot point is about more than just a chance sequence involving classic spaceships. The way the New Republic pilots behave, and one specific line, hints at something else — when the Rebellion against the Empire was successful, the Empire didn't go away.

Although in-canon Star Wars novels like Claudia Grey's Bloodline and Chuck Wendig's Aftermath trilogy give a larger sense of galactic politics after Return of the Jedi and before The Force Awakens, actually seeing how this plays out on screen is a very different thing. Here's how The Mandalorian just gave us a larger piece to the political puzzle of the Star Wars sequels.

In The Mandalorian Season 1, Episode 6, "The Prisoner," Mando took a job that involved breaking criminal out of a New Republic prison ship. That episode ended with three X-wings unwittingly doing Mando's dirty work for him by taking out the criminals who double-crossed him. In this episode, one of those X-wing pilots, Trapper Wolf (again played by co-showrunner Dave Fiolni) returns, but this time, it's more than just a fun cameo.

The events of "The Prisoner" are certainly on Mando's mind when two New Republic X-wings sweep in and ask him to prove that he's not part of the Empire. Like cops pulling you over because you have a cracked taillight, they're making sure his ship is running a "transponder beacon," which is obviously something Mando doesn't want to do because it would broadcast to almost everyone who he is and what he's up to. By the end of the episode, the New Republic X-wing cops do figure out who Mando is, but they let him go anyway.

Here are three big takeaways for what this all tells us about the state of the galaxy.

3. At This Point, The New Republic Is Trying to Regulate EVERYTHING

The primary conflict in the episode is caused because Mando was operating under the assumption that he could ignore certain transponder beacon rules because his ship was "pre-Empire surplus," which is kind of like driving a diesel truck that can't past vehicle emissions testing because it has "historical" plates. The New Republic pilots Carson (Paul Sun-Hyung Lee) and Wolf tell him that because they control this sector, he has to "run a beacon." They later ask him to send them a "ping" to confirm he's not affiliated with the Empire.

Now, the Empire was a terrible regime with super-strict laws. And yet, there was a ton of crime under the Empire. It's possible that small transponder beacon rules like this one didn't exist across all of the Empire's territory prior to the end of Return of the Jedi. Could the New Republic actually be creating more laws than the Empire?

This scene makes that idea plausible. The Mandalorian Season 2 Episode 2 heavily implies that The New Republic's strategy towards governing was to create a ton of small regulations and laws to make criminal activity less fruitful. If true, this could explain the existence of the seemingly legally-regulated Bounty Hunting Guild, as well as the tiny technicality Carson and Wolf are trying to use to pull-over Mando.

2. The New Republic Basically Has the Same Problems as the Empire Did With the Rebellion

Carson says their patrol is "sweeping for Imperial Holdouts." In the larger narrative of Star Wars, this is a good thing because the Empire is bad. But, on paper, what Carson and Wolf are doing is really no different than the Empire looking for members of the Rebel Alliance back in the day. Sure, these guys don't open fire on Mando right away. But they do force him to crash and chase him based partially on the suspicion that he's got Imperial ties.

It's not like Mando likes the Empire — he hates it! But there's not much he's going to do about that right now. In fairness, the New Republic has a legit beef with Mando — he did break into one of their prison ships. But the fact that the Razor Crest is getting harassed in the first place should raise some eyebrows.

1. The Signs of the New Republic's Collapse Are Clear

By the time of The Force Awakens, the government of the New Republic is so ineffective at battling resurgent Imperial-leaning forces (the First Order) that Leia has to start another underground organization to once again restore freedom to the galaxy. In The Last Jedi, Poe Dameron identifies himself as part of the "New Republic," but that's more of a philosophical battle-cry than anything else.

Presumably, the New Republic only lasts for about 30 years. And at the time The Mandalorian, it's a government that is only five years old. At the end of the episode, Carson says that although they should arrest Mando, they're not going to because "these are trying times."

It's not clear how Mando could have been handcuffed and squeezed into those X-wing cockpits (shouldn't they be flying something bigger?) but it is clear that things are not going great in the galaxy for the New Republic. The fact that Moff Gideon is out there with his Stormtroopers and Death Troopers tells us everything didn't get super-sunny after the second Death Star was destroyed.

In Star Wars Legends, the New Republic is basically forced to become the Rebellion again in Dark Empire, and that's mostly because there just aren't enough Jedi around to actually keep the peace. The Mandalorian is telling us is the same thing happened in regular Star Wars canon, even if it took a little longer. X-wing pilots are cool, but, when it comes to rebuilding a huge galactic government, those blasters and orange jumpsuits are no match for the Force on your side.

Sooner or later, Palpatine is gonna come back, and the reason why no one will notice is that these X-wing pilots are too busy harassing nice Bounty Hunters with cute kids and a cargo full of Frog Lady eggs.