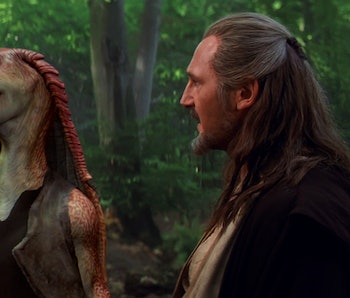 He’s’sa back! The goofy Gungan Star Wars fans love to hate, Jar Jar Binks, is reportedly reintroduced in the upcoming novel by Chuck Wendig, Star Wars Aftermath: Empire’s End, solving the burning mystery of what happened to him after he helped end the Republic.

Empire’s End, which will be available February 21, supposedly reintroduces Jar Jar as a literal clown, entertaining children and being avoided by the adults, as is pretty typical for him.

Mashable reported that a refugee boy named Mapo encounters a Gungan in a town on Naboo who introduces himself as the one and only Jar Jar.

“Jar Jar makin some uh-oh mistakens,” the Gungan tells Mapo, explaining why his situation is similar to the boy’s. He’s not wanted anywhere either. “Desa hisen Naboo tink I help the uh-oh Empire,” he adds before staring off into the distance.

Empire’s End, the final book in Wendig’s trilogy, mostly takes place between Return of the Jedi and The Force Awakens, which would mean Jar Jar’s probably landed in this line of work — being a clown — after decades of ridicule.

This “mistake” that Jar Jar refers to is most likely that time in Star Wars: Attack of the Clones when he introduced a war powers act that stripped the Galactic Senate of its power, handing it over to Chancellor Palpatine instead. Even though someone else would have done the introduction eventually, Jar Jar was the one with that burden, which he apparently still carries with him years later.

Who could’ve predicted this? “Whoopsses!”