“Credits can buy you muscle if you know where to look.” 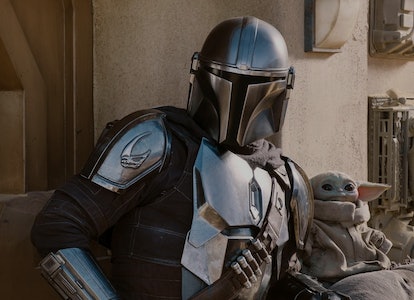 We haven’t seen Baby Yoda’s beautiful face in over a year, and the Mandalorian Season 3 release date likely won’t arrive until late 2022 at best. But in the meantime, there’s reason to believe a crossover could be brewing in The Book of Boba Fett.

Boba Fett and the Mandalorian

So far, the Book of Boba Fett has been a fairly self-contained adventure. A lot of the show is flashbacks set between Return of the Jedi and The Mandalorian Season 1, and we haven’t even left Tatooine. For some people, that may be a turnoff, but if you stopped tuning in, it’s time to catch up — or at least make plans to watch the next few episodes.

As my colleague Ryan Britt already pointed out, at the end of Boba Fett Episode 4, our titular bounty hunter discusses needing some help taking on his new enemy: the Pyke Syndicate. Suddenly, a familiar tune begins to play. It’s the theme from The Mandalorian, written by Ludwig Göransson, who composed the main theme for Boba Fett too but otherwise left this show’s music to Joseph Shirley.

The message seems clear, Mando is joining The Book of Boba Fett to help his friend, though whether Grogu, Bo-Katan, or any other characters from The Mandalorian join him remains to be seen.

What this means for the Mandalorian Season 3 release date

It’s tough to say, but it could be bad. After all, Mando can’t be in two places at once. So if Pedro Pascal was busy filming one or more episodes of Boba Fett, that’s time he couldn’t spend on the set of The Mandalorian Season 3. Then again, thanks to the magic of body doubles and face-covering helmets, Pascal technically doesn’t need to be on set to film a Mando scene. So it’s theoretically possible for the character to shoot two productions at the same time.

Still, if anything, a Mando cameo in Boba Fett likely means a slightly longer wait for The Mandalorian Season 3. Last we heard, the series could be returning as early as fall 2022, but at this rate, it probably won’t happen until late 2022 at best — plus, don’t forget about all the other Star Wars shows coming to Disney+ between now and then.

In that case, we should be thankful to be getting a bit of extra Mando between Seasons 2 and 3. Think of it as The Mandalorian Season 2.5 — and let’s just hope Baby Yoda comes along for the ride.