“Thousands once cheered such a display.” 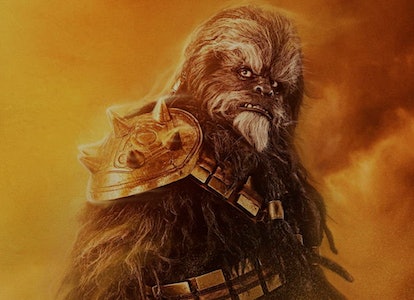 In The Mandalorian, the New Republic is sort of a joke. They’re basically highway patrol whose only purpose is hassling Din Djarin and anyone else trying to mind their own business. This makes it easy to understand how the First Order could have risen up right under Luke and Leia’s noses, but the latest episode of Book of Boba Fett reveals a different way the New Republic affected life out on the fringes of this galaxy far away.

Warning: Spoilers ahead for The Book of Boba Fett Episode 4.

In one of the best scenes from Boba Fett Episode 4, we catch up with the Wookie bounty hunter Black Krrsantan, who appears to be drinking his sorrows away at the local cantina. He then proceeds to take some of his frustrations out on some unlucky gamblers, which ends in Krrsantan tearing one alien’s arm off before agreeing to work with Boba Fett.

But before that happens, the cantina’s owner (played by Jennifer Beals) attempts to reason with him. She begins by praising Black Krrsantan as a once-great gladiator whose ruthless fighting skills drew thousands to watch him in action. However, she goes on to explain that those tactics no longer work. Tatooine has changed, and Krrsantan should change with it.

“Thousands once cheered such a display,” she says, “but those days have passed. In this more civilized place in these more civilized times, what was once celebrated in the bloodlust of the arena is now seen as horror and cruelty.”

Beals’ character seems to be suggesting that society has advanced beyond the bloodlust of the gladiator arena, but has she also revealed something bigger? Did the New Republic actually ban gladiators entirely?

Star Wars history is full of gladiator battles. The Empire allowed these activities to operate, and while many gladiators were slaves, Black Krrsantan actually volunteered to be trained. There were also droid-vs-droid gladiator battles, as seen in The Clone Wars, Solo, and elsewhere.

Even during the era of the Republic, gladiators existed. In Attack the Clones when Anakin, Obi-Wan, and Padmé have to fight those three CGI monsters, they’re doing it in a giant gladiator arena. In other words, gladiator battles have been a common practice throughout Star Wars history, but that seemingly changed after the fall of the Empire in Return of the Jedi.

Of course, it’s possible some forms of the practice continue. (In The Mandalorian Season 2, Mando visited what appeared to be an illegal fighting ring while looking for other Mandalorians.) However, based on Boba Fett, it seems possible the New Republic is clamping down on the practice.

That may seem like a good thing, but it also helps explain one of the biggest questions in Star Wars: Why was the First Order able to rise up so easily? Perhaps it's because most people in the galaxy didn’t actually like the New Republic very much at all. And banning this popular (if violent and outdated) sport probably didn’t help.

The Book of Boba Fett is streaming now on Disney+.