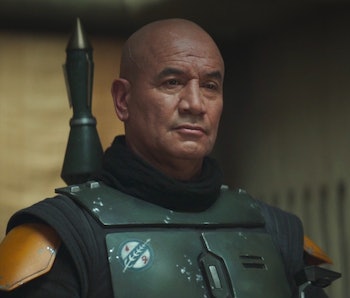 Before the ending of The Book of Boba Fett, a major Star Wars cameo is coming. And now, with the ending of Episode 4, “The Gathering Storm,” one Easter egg makes it pretty clear who’s making a comeback. Spoilers ahead.

In the final moments of Chapter 4, “The Gathering Storm,” Boba Fett and Fennec Shand discuss their next moves in the coming battle against the Pyke Syndicate. Essentially, although Boba Fett is confident that various other crime factions on Tatooine will support him long-term, in the short-term he simply lacks the numbers to fight all the Pyke troops. Sure, he’s got his gang of Mods on speeder bikes, and by the end of Chapter 4, he’s even got the Wookiee bounty hunter Black Krrsantan on his side. Still, it’s not quite enough. So where is Fett gonna get the extra help to take out the Pykes?

As Fennec and Fett talk strategy, Fennec suggests using some of Fett’s cash to get some help. “Credits can buy you muscle if you know where to look.” And as she says this, the Ludwig Göransson-composed musical theme from The Mandalorian is clearly heard. This is the first time this musical theme has been heard outright in The Book of Boba Fett, which can really only mean one thing, Din Djarin, Mando himself, is clearly crossing over to The Book of Boba Fett.

But when Mando does show up, who is he bringing with him?

Boba Fett and the Darksaber connection

If Fennec Shand and Boba Fett decide to hire Mando to help them fight off the Pyke army, clearly they’ll need more than just him. In this way, an upcoming climactic battle in The Book of Boba Fett could have been foreshadowed by the Season 2 ending of The Mandalorian.

Although we tend to focus on the moment where Mando gave Baby Yoda to Luke Skywalker, the other major development in the finale of Mandalorian Season 2 was the moment Mando won the Darksaber from Moff Gideon. Much to the chagrin of Bo-Katan, Mando getting that saber officially made him ruler of all the Mandalorians.

What this means is that when Mando comes to help out Boba Fett — because he obviously will help — he’ll also bring with him, possibly, an entire army of other Mandalorians. Will Bo-Katan be a part of this? Has she learned to accept King Fett? Will Koska Reeves (Sasha Banks) also be there?

In addition to the inevitable cool cameos, getting a look at Mandalore could be a welcome change for Boba Fett. Even Luke Skywalker had to take a break from Tatooine for a while.

The Book of Boba Fett airs new episodes on Wednesdays on Disney+.