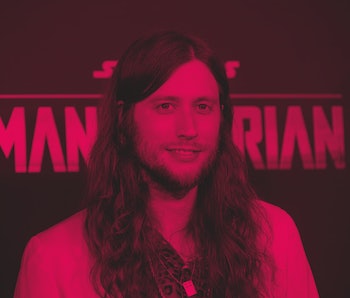 The propulsive theme for The Mandalorian not only redefined Star Wars music, it's also become the soundtrack for millions of people's motivational playlists. The hard-to-categorize score, composed by Ludwig Göransson, doesn't just transport us to a galaxy far, far away, it also feels somehow closer and more intimate than the John Williams space opera that came before.

Whether it's for The Mandalorian, Black Panther, or Tenet, Göransson music doesn't have much in common with what we're used to hearing in science fiction scores. It's tempting to compare the Swedish composer to what Vangelis did for sci-fi with Blade Runner, but even that falls short. Göransson's music isn't just different from other sci-fi scores, his various creations are also different from each other.

The Mandalorian Season 2 will also incorporate new sounds and musical styles as the show expands beyond what we saw in Season 1.

"In Season 2, it's a different kind of payoff now, when you hear the theme," Göransson tells Inverse. "I've been able to do a lot of different iterations. There's also a lot of new characters and new places we're traveling to."

On the same day that The Mandalorian Season 2 began on Disney+, Göransson launched a new personally curated Sonos Radio Station channel called "Things that Stuck." This mega-playlist of over 300 songs represents not just Göransson's music, but also the music that made him who he is.

Ahead of the launch of "Things That Stuck," and the return of The Mandalorian, Göransson chatted with Inverse about some of his favorite sci-fi film scores, but also got in-depth about what to expect from the music in Mando Season 2, and whether or not we'll ever hear a famous Star Wars theme mixed in with his music.

I just saw you accept your Mandalorian Emmy with your new baby. Did being a dad change the way you curated a playlist of 300 songs?

People always ask me why are Swedish producers and artists so success [in music.] People ask: Why is that and why are you all so successful? I get that question a lot. And that question has made me think I should have a good answer. Apart from the great music education, we have in Sweden, in elementary school and high school — I went to a musical elementary school where we sang in the choir every day — I also realized that Sweden has great children's music. Some of the children's songs best songs were written by Swedish jazz musicians.

This is a long way of saying that some of the songs on the playlist are children's songs that I grew up singing in Sweden. My perspective on music changes all the time. Having my son has changed my music perspective in a lot of different ways.

Is there anything new people can expect from The Mandalorian music in Season 2?

In Season 1, all the sounds, all the themes, all the music was new. And then, people didn't connect the music with the imagery right away. It wasn't until the last few episodes that people started recognizing the themes, and connect with it in a different way. Which brings us to Season 2. Suddenly, people are very familiar with the Mandalorian theme. When people hear the first note now they feel a lot of different feelings. You could have fun with it in a different way. In Season 2, it's a different kind of payoff now, when you hear the theme. I've been able to do a lot of different iterations. There's also a lot of new characters and new places we're traveling to.

Stylistically it's kind of all over the place. It's almost like my Sonos playlist. And that's what I love about film scoring. What I get to do with film scoring, depending on what project it is — I figured this out at an early age — you could score anything from jazz to metal to classical. Once I figured that out, and moved to LA and began working on film composing, then I'm working on this show, and I can bring all these different genres into this one show. I'm able to blend genres with The Mandalorian and bring in different instruments from all over the world and then tie it together with production, but also, the five-piece orchestra for each episode.

So, Season 2, musically, is all over the place. But I think it still feels connected like it did in Season 1.

Has there ever been pressure to throw-in a familiar John Williams score or motif?

I really like the last couple of Star Wars movies and I like the music from those movies, too. Even when it's different composers. John Williams, of course, did The Rise of Skywalker, but what Michael Giacchino [Rogue One] and John Powell [Solo] did was one of the most difficult things any composer could do. When you already have the John Williams score, and you're instructed to work within these themes that are really famous. I mean, they're the Star Wars themes. I think they did an incredible job.

“If I did have an idea to try and incorporate an old Star Wars theme, I know they would be open and listen to my thoughts.”

Fortunately for me, under Jon Favreau's direction, they were kind of giving me freedom and saying, this is a new chapter and this is a new universe. And we want to explore different sounds and see where we can take this. That took a lot of pressure off my shoulders. I mean, there's still pressure because it's part of Star Wars. That John Williams score is probably the most famous music ever written for film and the best film music written, ever.

With Mandalorian, we're open to anything. So, if I did have an idea to try and incorporate an old Star Wars theme, I know they would be open and listen to my thoughts. As long as it makes sense, story-wise.

What are some John Williams scores that aren't Star Wars that you like?

When I did research for The Mandalorian, I listened to a lot of John Williams' early work, up until he did Star Wars. I wanted to see what he was experimenting with production-wise. Like Lost In Space, and there's a movie called Earthquake (1974), and the main theme for that is incredible.

Why should someone check out your Sonos Radio Show?

It would take you thousands of hours or millions of hours to put this kind of time into finding the electric mix of music, that is emotionally also very tangled together. If you like my music, this is emotionally connected. Lots of different genres from all different parts of the world. But, if you like my aesthetic, I think you'll find more of what you like on my list.

You can check out Ludwig Göransson's Sonos Radio Station here.