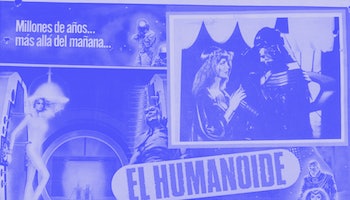 The music of The Mandalorian is like no other Star Wars score that has come before it. Ludwig Göransson will make you feel like you've been transported into an outer space western, elsewhere it recalls the space opera tradition of John Williams, and other instances, it sounds like absolutely nothing else you've ever heard.

In a recent chat with Göransson, the composer revealed a very surprising inspiration behind the music of The Mandalorian. Yes, he loves John Williams, but one of his lesser-known influences is an obscure Italian film called El Humanoide, or The Humanoid. Here's what Göransson said about this fascinating, and unexpected connection between his music, and what was basically a Star Wars rip-off.

Ahead of the premiere of The Mandalorian on Disney+, Göransson will be launching his own Sonos radio station, filled with music he loves and is inspired by. Göransson tells Inverse the Ennio Morricone score for The Humanoid helped think about Star Wars music in a new way.

"I love going to record stores and getting old vinyl records of scores. Morricone did thousands of scores. I found this movie [The Humanoid] that looks exactly like Star Wars. It was in 1979," Göransson says. "So, this is Morricone's take on Star Wars. It's awesome. It's like these weird '70s synthesizers and he found some way to combine that with a disco orchestra. It sounds European and a bit Japanese."

When you listen to just a snippet of any of the Morricone music for The Humanoid, you can immediately understand why Göransson felt the sensibilities were similar to what he was trying to do on The Mandalorian. The tone and the instruments aren't really the same as the Mando music, but there's a gradual and patient building of themes and motifs, that somehow feels heroic, but in a sneaky kind of way.

"This score will be on my Sonos list," Göransson insists. But snippets of the score for The Humanoid are also floating around YouTube. There's also a beautiful version of the score on vinyl if you're into old sci-fi soundtracks that are fun to spin on a turntable.

In addition to the Ennio Morricone score for The Humanoid, Göransson also saysThe Mandalorian score took some inspiration from Gustav Holst's The Planets. "As most people know," Göransson points out, "It was a huge influence on John Williams for Star Wars."

Check out Göransson's epic Sonos Radio Station playlist on Friday, October 30, which will include selections from The Humanoid. Also, come back to Inverse on Friday, for our full in-depth interview with Göransson, including what you can expect to hear in The Mandalorian Season 2.