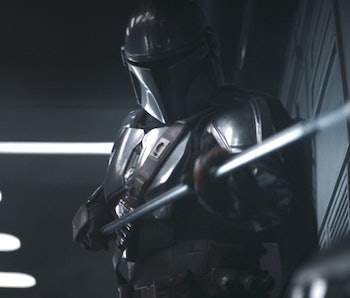 Mando is our King! In the finale of The Mandalorian Season 2, the heir to the throne of the planet Mandalore is weirdly, no longer Bo-Katan. Suddenly, Din Djarin himself is poised to become the true ruler of the Mandalorians, mostly because he accidentally won the Darksaber in a fight he was trying to avoid. But, what does this big power shift mean for the further adventures of The Mandalorian? Assuming we get a Season 3 of Mando, and The Book of Boba Fett is just it's own thing, then Din Djarin may have just entered the most treacherous of all Star Wars worlds: Space Politics!

If Din Djarin does become the ruler of Mandalore, a hypothetical Mandalorian Season 3 could completely change the point-of-view of the entire series. Instead of being just focused on the knowledge Mando has as a Bounty Hunter, the scope of the show could encompass the political machinations of the entire galaxy. And if that happens, The Mandalorian could be poised to repair some wonky world-building from The Force Awakens and the rest of the sequels (not the mention those terrible space politics in the prequels). In short, Mando's possible new role as the ruler of Mandalore could fix some huge plot holes. Warning! Spoilers and ahead.

The problem with Star Wars and politics

Star Wars loves delving into space politics, but when it comes to the movies, this is usually a mistake. The original trilogy basically ignored politics for the better — the most we get is the early reveal that the Senate has been dissolved. But when George Lucas decided to make the prequels, he went big on space politics, and we all know how that went.

Meanwhile, the sequel trilogy sort of tried to find a middle ground. There's a bit more politics injected into the plot, at least in The Force Awakens, but after the New Republic gets destroyed, the story reverts back to a classic Star Wars dynamic of Empire (First Order) vs. Rebels (Resistance). The politics are the least interesting part of those movies, but The Mandalorian could change that be revealing how the galaxy got to the point just before the First Order decided to blow up the entire New Republic government in one fell swoop.

How did the New Republic fall in Star Wars?

In between the time of The Mandalorian (9 ABY) and The Force Awakens (34 ABY) the politics of the galaxy shift radically. In Mando, we mostly see the galaxy in a kind of honeymoon phase following the defeat of the Empire in Return of the Jedi. But inherent in the familiar Empire Versus Republic status-quo is the knowledge that none of this will last. Everything about the New Republic's efforts to maintain order in the Outer Rim of the galaxy scans as futile throughout the series, and Star Wars fans know the writing is pretty much on the wall from the outset. Eventually, the New Republic will grow weak and ineffective, allowing the First Order to wreck the galaxy. Even before Starkiller Base destroys the seat of the Republic in the Hosnian System, Leia had already been forced underground in order to begin her secret Resistance.

But how did things get that bad? It seems possible the New Republic didn't do a great job uniting the galaxy.

In The Clone Wars era, the planet Mandalore declared itself neutral in the war between the Republic and the Separatists. The impact of this on the Clone Wars was significant enough that Obi-Wan Kenobi tried very hard to get the Mandalorians to join the Republic to stop the Separatists from winning. At the time, Mandalore was officially a peaceful planet, but as we learned in The Clone Wars, there was still a ton of different Mandalorian warriors hanging around. These Mandalorians (including Bo-Katan) never formally joined forces with the Republic, but they did fight to try and keep Darth Maul's Shadow Collective (and the Empire) off their planet. With Maul, this worked, with the Empire, it didn't.

Hypothetically, if Mandalore had sided with the Old Republic sooner and united its warriors against the Separatists, you can imagine a different outcome to the Clone Wars. Granted, most of the various sects of Mandalorians weren't really getting along at that point, but the larger concept remains: The planet Mandalore was a strategic asset in the Clone Wars, and it stands to reason that after the Empire fell, the same thing was true.

Now that Din Djarin is theoretically in charge of the entire race, will he be able to unite the various clans and sects of Mandalorians into a united front?

Will Mandalore join the New Republic?

During the time of The Mandalorian, the seat of power for the New Republic isn't on Courscant anymore, but it's not yet moved to the Hosnian System either. At this point, the New Republic's government is centralized on the planet Chandrila, the home planet of Mon Mothma. In this 9 ABY timeframe, it seems like the New Republic is gathering allies, and trying to tighten up control to prevent the remnants of the Empire from screwing everything up. Again, we know that they'll fail, but other than some great novels like Bloodline, we've not really seen how the breakdown of the New Republic happens. Presumably, Cara Dune made the planet Nevarro officially connected to the New Republic this season, or at least she acts like that's the case.

This fact — combined with Mando maybe taking the throne of Mandalore — seems to point toward a period of growth and expansion for the New Republic. Right now it feels like good people are being put into power on big planets. Meaning, if Mando or Bo-Katan do ascend to the throne of Mandalore, then they will almost certainly have to face the question: Should their planet join the New Republic?

The answer to this question isn't really as interesting as the process by which the question gets interrogated. The point-of-view in The Force Awakens is within a galaxy that is already on the brink of total war, again. But again, The Mandalorian is set way before any of that happens. The New Republic has only been in power for five years, and things are still changing. The path from this period of time to the political status quo of The Force Awakens is still very murky.

But if Din Djarin tries his hand at space politics in Mandalorian Season 3, some of that fog might start to lift. And unlike some of the other outer space politicians, Mando doesn't actually have a hidden agenda. He only cares about making the galaxy safe for his people, and adorable little ones like Baby Yoda. How could his idealism change the galaxy? Of all the possible questions for Season 3, this feels like the one that is closest to what the heart of the show is about.

Right now, we've only heard a select few people say "This is the Way." Now imagine the senate chamber of the New Republic filled with people who love Mando chanting it back at him. Before the New Republic falls, it has to get going again. Maybe this is the way democracy returns, with thunderous applause for a former bounty hunter named Din.

The Mandalorian Seasons 1 and 2 are streaming now on Disney+.