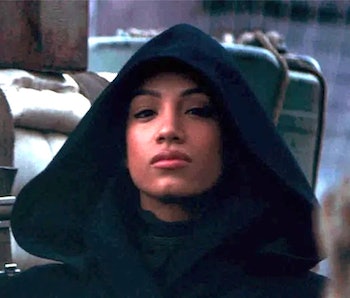 The showrunners of The Mandalorian don't want you to know what's coming. With no episode-specific teasers, our knowledge of what's ahead in Season 2 begins and ends with the pre-season trailer. It includes all sorts of adventures for Mando and Baby Yoda, and also teases a cameo by WWE superstar Sasha Banks, who lurks suspiciously near a dock. When this shot would appear in the show was a mystery, but one screenshot seems to answer that image.

Chapter 10 of The Mandalorian found Din Djarin playing Uber driver for a young Frog Lady who promised information about Mandalorian coverts in exchange for transportation to "the estuary moon of Trask in the system of the gas giant Kol Iben," where her husband awaits. Neither Trask nor Kol Iben has appeared in Star Wars so far, so it was unclear what awaits them.

However, a close look back at the trailer reveals Chapter 10 wasn't the first time fans have seen the Frog Lady. She appears in one key shot of the trailer, which also seems to include her husband as they lead Mando and Baby Yoda through a harbor setting. Of course Trask is a water planet: if you were an amphibious alien living on a desert planet like Tatooine, you'd want to find somewhere more aquatic to start your family.

This industrial setting complete with rigging and squid-like dockworkers fits the background of Banks's appearance perfectly, so it seems Chapter 11 will likely include her. It's not clear if she'll be a major part of the episode or limited to an unexplained cameo, much like Boba Fett's was at the end of the Season 2 premiere.

The remainder of the trailer suggests Mando will take Baby Yoda on a boat ride. Mr. and Mrs. Frog don't seem to be with them, so they're probably tracking down whatever info regarding the Mandalorian coverts they get in return for the transport in the Razor Crest.

Because of this, we know the action of the next episode won't just be centered at the dockyards, but does seem to take place primarily on Trask. It may not be a good sign for more of Sasha Banks's character, but her quick disappearance in the trailer seems to imply she reports to more like her, possibly including a familiar face like Bo-Katan Kryze or even Ochi, the Sith assassin.

The Inverse Analysis — Deciphering the trailer is a breeze in hindsight, but gleaning info for future episodes is never a sure thing. However, unless Mando encounters yet another obstacle in his journey to reunite Frog Lady with her husband, we'll see her journey come to an end in the next episode, and Sasha Banks's appearance will no longer be the vague mystery it's been so far.