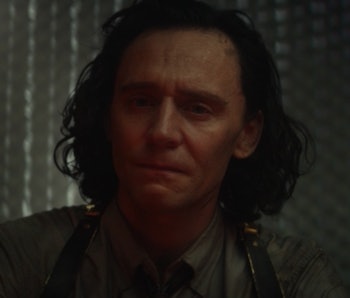 At the end of Loki Season 1, Marvel’s God of Mischief wasn’t in what you might call a good place.

Concluding with Loki (Tom Hiddleston) trapped in a timeline ruled by Kang the Conqueror (Jonathan Majors), the episode also saw him separated from Sylvie (Sophia Di Martino), his love interest and most trusted ally. They didn’t split on the most amicable of terms, either, with Sylvie forcing Loki through a time portal so she could carry out long-awaited vengeance.

It was a dark and tragic moment — one that will apparently be at the forefront of Loki’s mind when the Disney+ series returns for its confirmed second season.

Loki’s Search for Sylvie — It’s been less than a month since Loki wrapped up its initial six-episode run, which means few details have been released about its highly-anticipated second season.

Of course, that hasn’t stopped Marvel fans from speculating about Loki Season 2, and thankfully, the show’s Season 1 finale did leave them quite a few cliffhangers to think about. However, during a recent interview with Empire, Tom Hiddleston did hint at what’s to come in Loki Season 2.

“I don't think he will stop searching [for Sylvie] now. He feels that this is something he has done, a mistake that he has made, and he's invested in setting it right."

The Future of Loki & Sylvie — Hiddleston’s comments, while minimal, do shed some light on Loki Season 2.

More specifically, the actor’s assertion that Loki believes his split from Sylvie is the result of “a mistake that he has made” says a lot about how much the God of Mischief grew over the course of the show’s first season. It also, notably, illuminates how the character views the circumstances of Sylvie’s betrayal.

That is to say, Loki doesn’t seem to view it as a “betrayal,” so much as an inevitable outcome of his own track record of treachery. That’s a surprising and mature viewpoint for the character to take, but it does make some sense when looking back at Loki and Sylvie’s fight.

The characters’ entire confrontation in the Loki finale was, after all, essentially the result of their own, complicated relationships with trust. Loki and Sylvie couldn’t come to an agreement about the future of the Time Variance Authority and the fate of He Who Remains (Majors) because they simply didn’t trust each other. As Loki himself said during the scene, “You can’t trust, and I can’t be trusted.”

With that in mind, Hiddleston’s comments seem to suggest that Loki Season 2 will see the God of Mischief working diligently to try and fix his untrustworthy reputation in order to heal his relationship with Sylvie. For that to be a worthwhile mission, Sylvie will have to work on her own trust issues as well, which could prove to be easier said than done.

The Inverse Analysis — Fans don’t know anything, really, about Loki Season 2. Fortunately, there’s a high chance that a handful of upcoming MCU films will help establish the season’s overall story, with both Spider-Man: No Way Home and Doctor Strange in the Multiverse of Madness expected to deal heavily with the fallout of events in the Loki Season 1 finale.

That said, what has always been clear about the show’s second season is that the evolution of Loki and Sylvie’s relationship will remain a central focus. Whether or not that means the two characters will manage to actually overcome their respective flaws and forgive each other, or whether they’ll only grow further apart, remains to be seen.