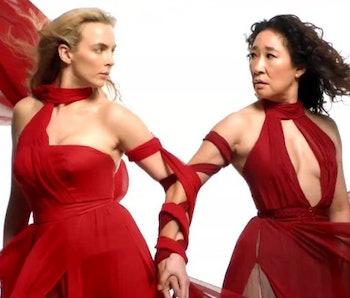 Now that Killing Eve Season 3 is in full swing, newcomers to the show and longtime fans want to know how and where to watch the latest episodes. It’s especially pertinent information for anyone who might not have access to AMC or BBC America, which is where the drama airs new episodes every Sunday.

Here’s everything you need to know about when Killing Eve Season 3 will be available on Hulu and how you can watch online.

Killing Eve Season 3 came two weeks early this year, picking up six months after the Season 2 finale, when Villanelle shot Eve and left her for dead in Rome. As Season 3 kicks off, Eve must pick up the pieces of her life and move on. Villanelle resumes her duties as an assassin, assuming her former adversary and maybe-girlfriend was dead. But the stalemate could only go on for so long, and Eve was drawn back into the cat-and-mouse game after a tragic death set off a chain of events that brought her back into Villanelle's captivating orbit.

Is Killing Eve Season 3 on Hulu yet?

No, not yet. However, Season 1 and Season 2 are both available to stream on Hulu.

Historically, the spy thriller has debuted on Hulu at the end of every year. Season 1 premiered in April 2018 on AMC and BBC America and was then available to stream on Hulu in December that year. Meanwhile, Season 2 followed the same pattern and premiered on December 18, 2019 on Hulu.

According to IMDb, the Season 3 finale is scheduled to air on May 31 and is likely to debut on Hulu in December as well.

Can I watch Killing Eve Season 3 without cable?

Yes, you can! You'll need the AMC app, which you can download through the app store. Right now, you can watch the Season 3 premiere on BBCAmerica.com and AMC.com for free, no login required.

Unfortunately, the rest of the episodes are only accessible through an authenticated TV provider account, like Comcast, Verizon, or Sling TV. That requires login information, which is typically the username and password associated with a TV provider account.

For those with cable subscriptions, AMC Premiere offers the option to watch Killing Eve without advertisements. Subscribers can pay a reduced annual fee (which is currently $29.49 for 12 months) or opt for the monthly option ($4.99) after a one-week free trial.

Is Killing Eve Season 3 available to watch on Netflix or anywhere else?

No, the AMC series is not available to watch on Netflix and it’s doubtful that the drama will ever make it to the streaming service. All three seasons of Killing Eve are available on Amazon Prime, but you'll have to purchase individual episodes ($2.99 for HD) or pay for the entire season ($19.99 for HD).