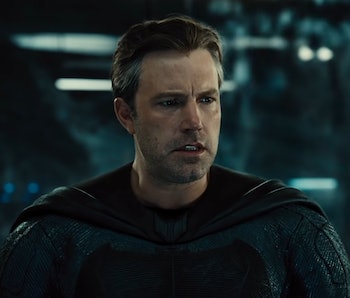 Well, this is soon. Zack Snyder's Justice League, better known as the "Snyder Cut" of the 2017 superhero movie Justice League, has a release date on HBO Max. And it's really, really soon.

What Happened? — On January 29, director Zack Snyder and studio Warner Bros. released new teaser posters for Zack Snyder's Justice League. The posters, all black and white, contained a release date of March 18, 2021, along with one word: "Streaming."

The film (and yes, it is a film and not a four-hour miniseries as previously reported) will stream on the WarnerMedia platform, HBO Max.

You can see the posters, including an extremely hammy one with a destroyed film canister containing unraveled celluloid film, in the embeds below.

A new villain? — Perhaps most interesting, the official new synopsis for the Snyder Cut mentions three villains the Justice League will need to defeat: "Steppenwolf, DeSaad, and Darkseid." Steppenwolf was in the original movie and Darkseid was already confirmed, but DeSaad's involvement is news to us.

In the DC Comics, DeSaad is one of Darkseid's followers and serves as the supervillain's head torturer. He is immune to poisons and disease and is also a master inventor. His name is a reference to the French author Marquis de Sade.

DeSaad's role in the Snyder Cut is unclear, but maybe we'll get a glimpse at Happyland, the "amusement park" he built to hold his prisoners.

Snyder Cut Cometh — The March 18 release date is one of the definitive final details about the fabled "Snyder Cut" before its release on HBO Max. The saga has been a long one, dating back to just after the movie's lukewarm release in November 2017 and fans demanding to see Zack Snyder's version that was lost when director Joss Whedon took over.

When Snyder left production of Justice League in early 2017 to tend to his family after the death of his daughter, The Avengers director Joss Whedon (who did script rewrites for Justice League) took over duties and oversaw the film during reshoots. As we'd later learn, this led to more alleged trouble on set, with actor Ray Fisher speaking up against Whedon and the "enablers" of DC Films.

I will also selfishly take some credit in the "Snyder Cut" as I interviewed the crew of Justice League, including cinematographer Fabian Wagner, who confirmed very early on that there was so much unused material for a director's cut.

Real momentum for the Snyder Cut started in late 2019 when Justice League stars, including Ben Affleck (who had left his Batman role far behind him at that point), tweeted the hashtag #ReleaseTheSnyderCut. Months later in 2020, Zack Snyder confirmed on a Vero livestream the arrival of Zack Snyder's Justice League for the newly-launched HBO Max platform in 2021. A trailer was released during the summer weekend event DC FanDome.

The Inverse Analysis — The wording in the press release provided by WarnerMedia confirms that the "Snyder Cut" is a feature movie and not a miniseries, as was previously reported. But even in interviews, it was apparent that Snyder was experimenting with structure and merely kicking around the idea of a four-hour miniseries. It was never confirmed that the Snyder Cut would be a miniseries, and now, we know for sure it will be a single (and very long) movie.

What's surprising about the announcement is how close the March 18 release date is from today. It's six weeks. It's not a bad thing, it's just a Friday morning jolt that makes one go, "Oh, huh, that's soon." But at least we'll finally see the Snyder Cut, and fingers crossed, that this whole thing ends.

In ZACK SNYDER’S JUSTICE LEAGUE, determined to ensure Superman’s (Henry Cavill) ultimate sacrifice was not in vain, Bruce Wayne (Ben Affleck) aligns forces with Diana Prince (Gal Gadot) with plans to recruit a team of metahumans to protect the world from an approaching threat of catastrophic proportions. The task proves more difficult than Bruce imagined, as each of the recruits must face the demons of their own pasts to transcend that which has held them back, allowing them to come together, finally forming an unprecedented league of heroes. Now united, Batman (Affleck), Wonder Woman (Gadot), Aquaman (Jason Momoa), Cyborg (Ray Fisher) and The Flash (Ezra Miller) may be too late to save the planet from Steppenwolf, DeSaad and Darkseid and their dreadful intentions.