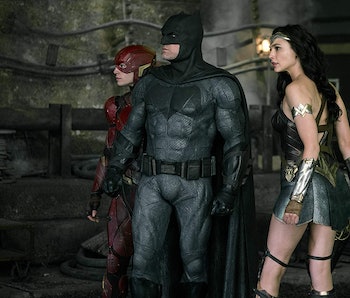 For the better part of three years, a portion of the DC fandom had held on to the belief a Snyder Cut version of 2017's Justice League had been kept from the public. The #ReleaseTheSnyderCut hashtag has prompted plenty of controversy and shouting on Twitter, with fans demanding to see the version of Justice League Zack Snyder envisioned before leaving the project in 2016.

Following a Man of Steel watch party on Vero in May 2020, Snyder announced that his version of Justice League was finally being released. So how did this all start? What is the Snyder Cut? When will it be released? Here’s everything you need to know about the endlessly controversial, once-mythical Snyder Cut, from its earliest origins to the latest production updates.

Way back in 2016, director Zack Snyder stepped down from the helm of the 2017 DCEU crossover film Justice League after the sudden death of his daughter. Snyder left near the end of production, meaning most of the film had already been shot. Soon afterward, Warner Bros. enlisted Avengers director Joss Whedon to finish the film. This resulted in major reshoots that fans have since argued changed the overall narrative and tone of the film, possibly for the worse.

While the demand for Snyder’s original version existed before Justice League hit theaters, it was only after the movie bombed both critically and financially that it developed a full-on cult following. Demands that Warner Bros. #ReleaseTheSnyderCut have been ever-present on the internet since November 2017. Advocates for the cause also used the platform as a way to fundraise for suicide prevention organizations, but as with most devoted online fan communities, there were toxic elements, too.

Does the Snyder Cut have a release date?

Yes, it does! Fans demanding for the release of Snyder’s version of the film have been circulating since 2017. In May, it was officially confirmed that Zack Snyder's Justice League would be released on HBO Max at some point in 2021. According to The Hollywood Reporter, the film would be released in a nearly four-hour director's cut and there was also the possibility for the film to be split into six TV-style episodes.

"It will be an entirely new thing, and, especially talking to those who have seen the released movie, a new experience apart from that movie," Snyder told THR, adding that fans "probably saw one-fourth" of Snyder's actual work on the film. Check out the HBO Max poster for the Snyder Cut below.

How is the Snyder Cut different from Justice League?

The Snyder Cut was filmed when the overarching plan for the future of the DCEU seemed a bit more concrete. Essentially, Snyder was establishing a storyline that connected with his other DC films like Batman v Superman and Man of Steel. The result was a darker, grittier, more cohesive version of the movie than what ended up in theaters.

The Snyder Cut will cost upwards of $30 million for post-production work, special effects, ADR, and more. However, cast reshoots aren't expected to happen. Still, the Snyder Cut plot will likely include all previously unseen footage and deleted scenes that were dropped when Whedon came aboard.

It’s more or less confirmed that Snyder’s version of Justice League would have featured a number of different plot points and character appearances. For example, despite its widely publicized tagline, “Unite the Seven,” the theatrical cut of Justice League features just six characters. We’ve since learned Snyder’s cut of the film would have introduced Green Lantern to the DCEU, rounding out the seven that were to be united.

Long-standing rumors also claimed Superman would be resurrected in Justice League (after his heroic sacrifice in Batman v Superman) only to don the black Superman suit from the beloved Return of Superman comics arc. It’s since been confirmed this was part of Snyder’s plan, which was changed during Whedon’s reshoots. With that in mind, fans should expect all of these loose plot threads to make their way back into the film. Oh, and that red sky color in the final battle? Snyder confirmed that'll be changed, too.

As for the Justice League cut we saw in theaters, also known as the Whedon Cut, the New York Times has confirmed just how much the movie changed from Snyder's vision and what he was working toward pre-exit. According to the newspaper, Whedon added almost 80 new script pages post-takeover as well as added scenes for Gadot, Diane Lane (who played Martha Kent), and Amy Adams (Lois Lane). Whedon also cut storylines for Ezra Miller's Flash and Ray Fisher's Cyborg. We can also file the great Henry Cavill Mustache Fiasco of Justice League under Whedon cut changes, too.

Following the official Snyder Cut announcement, the two versions of Justice League are listed separately on IMDb and should be considered two different films. For now, there's no confirmation about how the Snyder Cut will affect the DCEU canon moving forward. Stay tuned.

Is there a trailer out for the Snyder Cut?

No, not yet. Watch this space.

Zack Snyder's Justice League is scheduled to be released on HBO Max at some point in 2021.