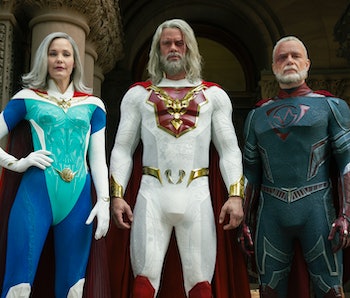 This article about the series Jupiter’s Legacy was originally published on March 1, 2021 and updated on January 17, 2022 following the release of the season on Netflix. Read on for the original article, with some new changes to reflect the latest updates on this topic.

"This is the resting place of the world's greatest heroes."

So begins Mark Millar's original superhero comic book series Jupiter's Legacy. First published in 2013, the series is currently the longest in Millar's creator-owned Millarworld imprint that's also spawned Wanted, Kick-Ass, and Kingsman. And the world knew Jupiter's Legacy when the superhero saga hit Netflix in May 2021 as a live-action series.

But what is Jupiter’s Legacy? What is it about? Who is in it? And what makes it different from other subversive superhero media like Kick-Ass, The Boys, and The Umbrella Academy?

Here's everything you need to know about Jupiter's Legacy on Netflix, including its plot summary, cast, character breakdowns, trailer, and more.

When was the release date of Jupiter's Legacy on Netflix?

Jupiter's Legacy began streaming on Netflix on May 7, 2021. The series consisted of eight episodes.

Is there a trailer for Jupiter's Legacy?

Yes! The trailer for Jupiter’s Legacy was released on April 7, 2021, one exact month before the series premiered. You can watch it below.

What is Jupiter's Legacy?

The story explores the inter-generational conflict between the old guard of superheroes and their self-absorbed, fame-obsessed children who are training to replace their predecessors.

Creatively, Millar aimed to tap into his biggest influences, including films like Star Wars and King Kong, Shakespeare's Hamlet, and the Greek and Roman myths, all set in a modernized interpretation of the Golden Age of comic books. The Great Recession of the late 2000s is also explored in metaphor.

Millar summarized the many facets of Jupiter's Legacy in a 2013 interview with Comic Book Resources as "something that feels more mythological" and a blend of "classic themes and very old story structures with modern imagery." He added:

"Superhero stories tend to have a fairly well-worn structure, but I wanted this to have a very grand, operatic series of beats and really get a sense of escalation in an almost Wagnerian fashion. There's lots of Hamlet in it. There's a lot of father/son things going on with it. It almost seems like something you'd be given in school."

Millar added he wanted the series, which sits at 10 issues (plus 12 more from Jupiter's Circle) as "a big, weighty tome that happens to be about superheroes."

"It's about the dawn of man, the origin of the planet and everything right up to contemporary economics and people nervous about the fiscal cliff and the end of capitalism," Millar said. "But it also goes as small as relationships and family life, too. This is my ultimate superhero story."

What is the plot and story of Jupiter's Legacy?

In Jupiter's Legacy, the aging superhero team known as the Union — led by Sheldon Sampson, also known as "Utopian," the story's Superman analog — come into conflict with their rebellious children, who are relishing all the upsides to having famous parents and superpowers of their own. It doesn't take much before a fuse is lit and heroes become villains.

The Netflix version of Jupiter's Legacy explores roughly the same story. Both Millar and series star Josh Duhamel confirm the show spans a hundred years, a change from the comic's two timelines (one set after the Wall Street Crash, the other set in the modern-day 21st century).

"It spans from the 1930s all the way to the present day," Duhamel told IGN. “I get to play this young, ambitious, naive, and vulnerable dude who just went through terrible tragedy with his family after seeing his father die in the worst possible way, and then go off on this journey where he literally loses his mind.”

"The two books that I did ... sort of merged them into one storyline," said Millar, who added that the story uses a Godfather Part II-like structure "where you saw the son’s life and the father’s life at the same age in parallel, and what was happening to each of them. It gives it such incredible weight."

The official Netflix summary of Jupiter's Legacy is below:

"After nearly a century of keeping mankind safe, the world's first generation of superheroes must look to their children to continue the legacy. But tensions rise as the young superheroes, hungry to prove their worth, struggle to live up to their parents' legendary public reputations — and exacting personal standards. Based on the graphic novels by Mark Millar and Frank Quitely, Jupiter's Legacy is an epic superhero drama that spans decades and navigates the complex dynamics of family, power, and loyalty."

Who is in the cast of Jupiter’s Legacy?

The cast of Jupiter’s Legacy is broken down below:

Where can I see more images of Jupiter’s Legacy?

A gallery of more hi-res images from Jupiter’s Legacy is below.

Unfortunately, yes. Despite the cliffhanger ending set up at the end of Episode 8, Netflix announced in June 2021 that Jupiter’s Legacy would not be returning for a second season. However, as you can see below, this is far from the end of this universe being seen on Netflix.

Are there spinoffs of Jupiter’s Legacy?

Yes! Despite Jupiter’s Legacy ending after one season, its legacy lives on in other ways. In November 2021, an anime adaptation of the Supercrooks limited comic series debuted on Netflix. At its premiere, the director revealed it took place in the same universe as the live-action Jupiter’s Legacy.

And while fans were disappointed with the cancellation announcement, they were met with some good news to counter the bad. A live-action Supercrooks adaptation—separate from the anime film—is being developed by Netflix and functions as a spinoff of the show. It is set to debut at some point in 2022.

This article was originally published on March 1, 2021