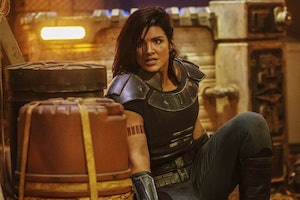 Well, it finally happened. After months of The Mandalorian actor Gina Carano mocking trans people, questioning the validity of the election, and discouraging the use of face masks in a global pandemic, a post comparing being a conservative to being a victim of a genocide was enough for Disney to cut ties with the performer behind Cara Dune.

As a trans person, I'm glad I can watch The Mandalorian without having to be reminded of the off-screen scandals. As a Star Wars fan, I'm slightly terrified as to how the minds behind the show will write off the character. So, here are all the ways Cara can exit the show without having to make another appearance, be it a recast, a write-off, or a replacement.

Recasting a character is often done on television shows like this one. Evan Peters'sappearance as Quicksilver over on the MCU side of Disney+ reinforces that. Even Pedro Pascal's old stomping ground of Game of Thrones recast multiple characters over its eight seasons. Heck, even Star Wars recast its Emperor Palpatine after The Empire Strikes Back. It's perfectly logical for another actress to take over the role without a canonical explanation. Here's who could step in for a seamless transition.

Buffy the Vampire Slayer and Angel star Charisma Carpenter also made headlines Wednesday for her claims against prestigious showrunner Joss Whedon. What better way to make reparations towards that bad experience than a plum role on a new franchise? Carpenter's years spent kicking ass as pretty-girl Cordelia will surely help in that category.

Michelle Rodriguez is a tried and true action star. She shared the screen with — and even conquered — Gina Carano in Fast and Furious 6, and is best known for her appearance as Ana Lucia in Lost. Michelle Rodriguez does have similar scandals in her past, as she starred as a trans woman in 2016's The Assignment and defended the choice. Still, an appearance in The Mandalorian could help her recoup her image.

Stuntwoman Amy Johnston was in all your favorite movies, you just didn't notice her. From Iron Man 3 to Deadpool to even providing reference for Star Wars Jedi: Fallen Order and The Last of Us II, she's responsible for so much great action. It's about time she was given the opportunity to step into the spotlight herself. She's even a fan of The Mandalorian already, and made the above fan film to show off her lightsaber skills. What a perfect fit.

Lucy Lawless is the original Badass Buff Lady. She played the titular role on Xena, Warrior Princess and blazed the trail for female-led action-adventure shows as we know it. She's also fabulous at acting without relying on stunts, as evidenced by her later role on Parks and Recreation. While Lawless is a fair bit older than Gina Carano, she could definitely still hold her own and remind Star Wars fans she's still got it.

We don't know much about The Mandalorian's casting habits, but they sure do love fighters. Gina Carano was an MMA fighter, and new character Koska Reeves was played by WWE Superstar Sasha Banks. The series could easily dip back into those archives to find someone like Ember Moon, who could fill the role if she's considering a career change. She's certainly got the intergalactic look down.

Cara Dune isn't an integral part of The Mandalorian. While it's cool to have her around, the story centers around the relationship between Din Djarin and Grogu. Showrunners Dave Filoni and Jon Favreau have literal decades of canon and non-canon characters at hand to pick from. Adding a fresh face to the Mando gang would be a great way to bring the show into a new, post-Luke-cameo era.

You can't speculate on the future of The Mandalorian without bringing up Mara Jade. She's the poster child of Star Wars Legends and the paramour of Luke Skywalker. Now that Luke is a part of the Mandalorian story, it could be the perfect time to bring in a possible love interest for him, something that would distract him from training Grogu so he could be reunited with Din.

These two fan favorites are a no brainer for promotion from "shows up occasionally" to "offically a recurring player." Migs Mayfeld gave the best speech of Season 2, believe it or not, and Cobb Vanth is both a Marshal like Cara and a Boba Fett wannabe space cowboy. Both of them contain huge untapped potential for future episodes, and now there's a free spot.

Evaan Verlaine is basically Cara Dune if she was a Rebel pilot. Raised on Alderaan and mentored by Leia's mother, Queen Breha Organa, blonde pilot Evaan worked alongside Princess Leia to rescue whatever survivors from Alderaan there were, and later assisted with the Battle of Yavin. She's got the same tramautic drama as Cara, but with a Rebellion twist.

6. Ezra Bridger (or some other character Rahul Kohli can play)

This is just a wish that one of the biggest Star Wars fans working as an actor today, iZombie and The Haunting of Bly Manor star Rahul Kohli, gets to live the dream of being a part of Star Wars. Maybe it's as Ezra Bridger, maybe it's as Kyle Katarn, maybe it's as an entirely new character, but Kohli's reputation as an enthusiastic fan and defender of trans rights will forgive a lot of sins.

It's hard to ignore the fact that The Mandalorian has had a spare professional fighter among its cast this entire time. WWE Superstar Sasha Banks was introduced in Season 2 as Mandalorian Koska Reeves, the second-in-command to Katee Sackhoff's Bo-Katan Kryze. Koska Reeves could fill the Cara Dune-shaped hole in The Mandalorian, but that would probably mean turning against Bo-Katan, which may be difficult to justify.

That's right, I think the best choice to replace Cara Dune is none other than one of the few Empire crew members we've seen on screen. While this officer hasn't done much but stand at the bridge and show visualizations to Moff Gideon, actress Katy O'Brian is a talented martial artist who hasn't been able to show off her skills yet. Her character flipping sides to join the Republic and Mando's quest would both use her to her full potential and replace Cara Dune without having to find a new actor.

If someone doesn't pick up Cara Dune's role where Gina Carano left off, there's got to be some sort of a narrative justification for her disappearance. The plot can't just say Gina Carano died on the way to her home planet, and not just because Alderaan's gone. Many Star Wars fans aren't aware of the off-screen scandal, so some explanation is needed.

An offscreen death makes a lot of sense, as it would both get rid of her character and raise the stakes for Mando's future. He's got to continue on his fight to make sure Cara didn't die for nothing. However, she esacped Season 2 relatively unscathed. A future appearance seems to be out of the question, so the only option would be an off-screen death, which could seem too stark of a plot twist.

Cara's arc in Season 2 seemed to be centered around her new role as marshal of Nevarro. She was obviously good at this job, so the New Republic could reassign her somewhere more in need of her no-nonsense crime fighting, a planet so dangerous and corrupt there would be no reason to visit over the rest of the series. As much as Gina Carano did, Cara Dune did nothing wrong, so maybe she deserves a promotion.

Does there really need to be an explanation? Maybe Cara is just so busy with her marshalling she just can't spare the time to help Mando on his long trail of sidequests. It's probably the laziest solution, but it's also the simplest. Sure, fans will miss her character, but that just primes the opportunity for a new character to step in.