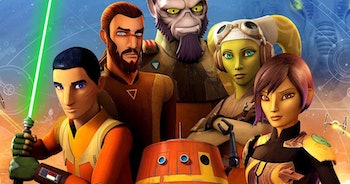 Huge reveals are part and parcel of the Star Wars experience. Whether it's "No, I am your father" or the unintentionally hiliarious "Somehow, Palpatine has returned," massive heel-turns make this franchise consistently fun and unpredictable. It allows fans to get really creative with speculation with all sorts of plot possibilities, because nothing is too outlandish to be feasible.

With that in mind, one fan has used a podcast to suggest the unsung hero of this season may have been behind enemy lines this entire time. Let's break it down.

Redditor zzELETRiKzz suggests the secret savior of the season may be the nameless Comms Officer, who has overseen the tracking and kidnapping of Grogu in three episodes so far. Considering how much dialogue she's been given especially compared to the other Empire staff, it's strange she hasn't been given a name yet. What's more, the actress, Katy O'Brian, is a trained martial artist and known for her combat work. Why would she be cast in a role that mainly consists of looking at holograms and saying short sentences to Moff Gideon?

The theory finds even more evidence in a little-known podcast appearance. O'Brian appeared on the Pink Milk Podcast, which focuses on on LGBT issues and Star Wars. At the 59-minute mark, one of the hosts, a Star Wars superfan, and coyly suggests her character may be a double agent. She laughs at the idea and calls it creative, but says "if that were the ending, there's no way I would be able to tell you that."

So while it's very plausible there may be more to her role than just giving status reports to Moff Gideon, this theory takes a step further to suggest a hidden identity for this lowly Comms Officer — Sabine Wren.

Implying O'Brian is playing Rebels character, Mandalorian, and graffitist Sabine Wren is a bit of a stretch, but with the inclusion of Boba Fett and Bo-Katan Kryze this season, she's the only major Mandalorian from the extended Star Wars canon we have yet to see make an appearance. Considering her combat experience as seen in Rebels, an actress with martial arts experience would be a perfect choice.

In Sabine Wren's last appearance, she was traveling with Ahsoka Tano in search of Ezra Bridger, and as we already saw Ahsoka Tano alone on the planet of Corvus, Sabine could be anywhere. That includes the bridge of Moff Gideon's Imperial Cruiser.

The Inverse Analysis — Sabine may or may not be the Comms Officer's secret identity, but she absolutely could be hiding a secret. Considering the actress's martial arts training, she could very well be a New Republic operative hiding under the surface or some other ally to Mando's cause. The other option is she's just an Imperial Comms Officer with a black belt in Space Hapkido. Either way, there's obviously more to this character than meets the eye.

Correction: A previous version of this story left out the important note about Sabine's ethnicity and representation and incorrectly described the Pink Milk podcast. We regret the error, and thanks to Candace Kaw and Maggie Lovitt for pointing it out.