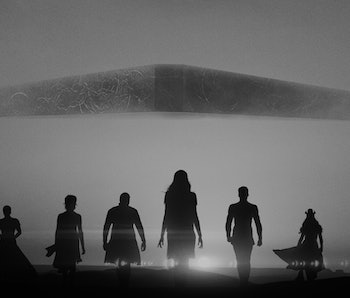 Marvel’s Eternals doesn’t look like anything that the studio has done before.

For one thing, unlike most films in the Marvel Cinematic Universe, which typically take place over a few days or weeks, Eternals spans thousands of years, focusing on a group of immortal beings as they form their own unique relationship with Earth. It promises a broader, more grand-scale view of time than any other MCU film before it. And with Nomadland filmmaker Chloé Zhao at the helm, Eternals will showcase the kind of artistic visual style unprecedented in a Marvel Studios project.

But despite visual and narrative elements working to separate Eternals from the rest of the MCU, the film shares a fascinating connection with a recent Marvel entry – one that could push it further into alignment with the studio’s overarching universe.

An Unexpected Connection — The first official poster for Eternals, released this week in conjunction with the film’s first trailer, credits Zhao and Patrick Burleigh as co-writers on the Eternals screenplay. While we’ve known for several months that Zhao worked on the final script for the film, Burleigh’s involvement comes as a surprise.

His credit on Eternals is especially notable given that he’s credited as having worked on 2018’s Ant-Man and the Wasp, as an additional writer/story consultant.

A Home in the MCU — The poster’s credits reveal nothing major about the plot of Eternals, and they don’t confirm details from alleged story leaks that have circulated online in recent months. But the presence of an experienced Marvel hand like Burleigh on Eternals’ creative team does raise interesting questions.

It’s possible Marvel brought Burleigh in on Eternals to ensure the movie feels at home within the broader MCU. The new trailer mostly sells the film on the strengths of a tone and visual style distinct from previous films. It’d be within reason for the studio to want another, Marvel-approved writer involved, making sure the plot doesn’t diverge too much from what audiences have come to expect.

The lighthearted dinner-table banter shown at the end of the Eternals trailer, for instance, feels far more reminiscent of other MCU films than any other moment in the preview. Could that scene be a product of Burleigh’s involvement?

The Inverse Analysis — To Marvel’s credit, the studio appears very supportive of Eternals and in particular of Zhao’s artistic vision for the film. But Marvel has also established a cohesive tone for the MCU across the past 13 years, so it’s plausible the studio could have brought Burleigh onboard to ensure Eternals still feels of a piece with its overarching franchise.

Given rampant speculation that the Eternals and other characters introduced in Zhao’s film will play a major role in Phase 3 of the MCU and beyond, Marvel is surely keen to ensure Eternals feels unique without interfering with its long-term strategy. In other words, while Zhao could have simply partnered with Burleigh because the two resonated creatively, his involvement also points to Eternals having more in common with Marvel’s previous films than its first trailer would otherwise suggest.

Eternals will be released in theaters on November 5, 2021.