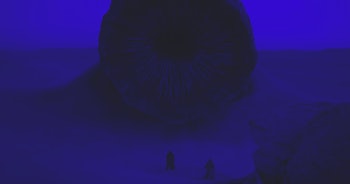 Is Dune a work of hard sci-fi? Or is it soft-science fiction that allows for some fantasy tropes involving swords and noble dukes running around on alien planets? The anachronistic blend of high tech and low tech is arguably what makes Dune tick. But, if you haven't thought about it for a while, or you're new to having long conversations about Dune, you might be wondering why there's a total absence of "smart" technology. There are no robots or droids in the future galaxy of Dune, and the technology, overall, is so throttled back that Paul doesn't even have the futuristic equivalent of Siri. But why?

The lack of "thinking machines" in Dune is intentional, and the ban on this technology actually creates the basis for all of the world-building within the original six Frank Herbert novels. But what's brilliant is this backstory is not really a huge cautionary tale. Instead, Herbert uses the A.I. revolution trope as table-setting for Dune. In doing so, he makes the world-building of other droid-heavy sci-fi fantasy universes seem a little bit silly. Light spoilers for the Dune books ahead.

The events of the first Dune book are set during the future year of 10191 A.G. The "A.G." stands for "After Guild," which refers to the Spacing Guild which regulates all space travel in the galaxy. Before this, the years are marked with "B.G." which means "Before Guild." The "BG" era (which ends about 10,000 years before Dune starts) also happens before an event called The Butlerian Jihad. In the glossary of Dune, this event is defined as "the crusade against computers, thinking machines, and conscious robots begun in 201 B.G. and concluded 108 B.G." In the prologue to the prequel novel The Butlerian Jihad (written by Brian Herbert and Kevin J. Anderson), this time period is described as being the most important event relative to the formation of the Dune-verse as we know it. Semi-regular Dune narrator Princess Irulan describes it this way: "The terrible war against thinking machines was the genesis of our political commercial universe."

The TL;DR version of this simply: The reason why there's no A.I. in the relative "present" of Dune is that by the time Paul Atreides and his family move to Arrakis, A.I. has already been banished for 10 millennia.

Herbert's decision to make the sci-fi world of Dune one dominated by a nitty-gritty analogy technology had a huge impact on the aesthetics of science fiction. You can't imagine the lived-in tech of Star Wars without this obvious influence, but whereas Star Wars offers little explanation for its high-tech/low-tech blend, Herbert's Butlerian Jihad allows him to create a world of anachronisms — which includes House Atreides fighting with swords — and to avoid any question as to why you don't just use robots to harvest the Spice. Like the 2003 Battlestar Galactica reboot, Dune imagines a future where technology has been intentionally throttled back to keep people safe from it.

Star Wars plays fast-and-loose with its self-aware droid population, and it wasn't until Solo that there was something resembled the reverse of the Butlerian Jihad — droids revolting against their human masters. In Dune, there are no droids because droids eventually try to take over and enslave you. In Star Wars, there are droids, and that's because droids are basically slaves. Though there's nothing in actual Star Wars canon to support this, you could imagine a distant point in the past of the Star Wars galaxy where droids had more power, and were, perhaps, throttled-down to be subservient.

In any case, Dune doesn't actually have to address any of this because the status-quo of ZERO robots has existed for 10,000 years. To put it another way, a novel set in the present day doesn't have to explain how sailboats work, because sailboats have been around long enough for us to just all get it. This is Dune's approach to its zero robot policy.

The Kevin J. Anderson and Brian Herbert Dune prequels and sequels attempted to fashion a narrative around the original six Dune book that elevated the importance of the "thinking machines" from the distant past. In fact, in the Sandworms of Dune sequel book, huge A.I. Overlords become the primary antagonist for the surviving characters of the old books (including a cloned Duncan Idaho). Dune fans are mostly not happy with Sandworms of Dune and some of the other sequels, mostly because the idea of humans v.s A.I. was only foreshadowed in the original books once or twice. Arguably, Frank Herbert seemed to be aware of the various predictable tropes of delving into a Terminator or Westworld-style storyline, so he smartly shoved all that stuff into Dune's distant backstory. That said, as some fans have pointed out, Herbert could have been planning to bring back some A.I. overlords in his sequels. But, because he didn't write these sequels, it's tough to know his intent. Or, more to the point, it seems doubtful that the way the A.I. was handled in the sequals would have been heavy-handed if written by Herbert. Yes, the return of A.I. is subtly foreshadowed, but it isn't what the original books are about.

This isn't to say that the books written by Herbert's son (Brian) and Kevin J. Anderson (who wrote a ton of Star Wars books in the '90s) aren't fun. It's just that, apart from The Butlerian Jihad itself, these books tend to make the overall story of Dune into something that it's (mostly) not in the original six books. Frank Herbert's sly decision to make robots and evil A.I. a part of "long time ago" backstory allows the original Dune books to be about something several sci-fi epics forget to focus on: Humans.

Dune (2020) is expected to hit theaters in December of this year. That still may change.