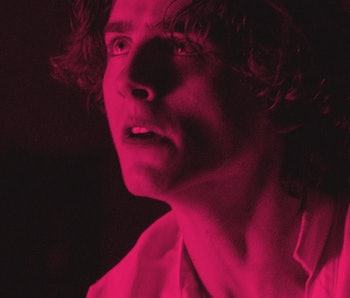 On September 9, 2020, there will be some kind of full trailer for Dune 2020, that will feel like it's been transmitted directly into our brains. Like the spice melange, this trailer will transform our minds, and perhaps give us extrasensory powers.

It will also make you psyched-as-hell for the new Dune, even if you don't really know — or care — about the books. There's one simple reason. Timothée Chalamet's performance as Paul Atreides, the guy who is destined to become Muad'Dib, looks awesome. The short teaser trailer that has been viewed by a select few is enough to make this version of Dune your next obsession. Mild spoilers ahead.

Recently, rumors of a Dune 2020 teaser trailer swirled around the internet and, I'm here to tell you that those rumors were true. That footage is very short and it is awesome. I have seen this footage. It is not a full trailer, but something that teases another, longer trailer. At one point, the words "watch the trailer on September 9th" appear. So, the leaked Dune trailer footage isn't really trailer footage, but instead a trailer for a trailer.

Still, this is real-deal footage from Dune, and it's pretty much exactly as the leaks have described. The scene from the first book in which the Bene Gesserit Reverend Mother tests Paul is recreated faithfully. Paul has his hand in the pain box, the Reverend Mother is holding the Gom Jabbar poison needle to his neck. We see some cool, sweeping footage of the planet Arrakis itself, and that's pretty much it. But, in all of that, the thing that stands out the most is this film's star, Chalamet as Paul Atreides. In the very short time that I watched him in this tiny amount footage, I'm convinced he was the right person for the part. He's out-of-breath, confused, but also confident and assertive. Paul's eyes don't become the glowing blue-in-blue shade that they're destined to be later in the story, but you can see in Chalamet's eyes that he is this character. He's the perfect blend of fierce and innocent, which is what this very complicated role of Paul Atreides requires.

Saying that the character of Paul goes on a journey is a little like saying Moby Dick is a book about marine life. Paul's journey is compelling because it's complicated, yet simple. Imagine Frodo becoming an all-powerful wizard by the end of the first Lord of the Rings book, and you'll have a better understanding of how big the role of Paul Atreides really is. There are hero's journeys, and then there is the arc of Paul in Dune. It requires a quiet intensity, and I gotta say, the second anyone sees this footage of Timothée Chalamet in this role, they're going to see Paul. I don't want to say that IRL Bene Gesserit had some role in making sure that Chalamet was born to play this part, but I can't rule it out either.

To be clear, I'm a big fan of both Kyle MacLachlan and Alec Newman in their Paul guises in Dune 1984 and Dune 2000, respectively. But both of those actors lacked what Chalamet has: The sense that you are dealing with a teenager who is wise beyond-his-years. The character of Paul is supposed to be only 15-years-old at the beginning of the story. As great as Newman and MacLachlan were in their versions, it's really hard to buy that they were ever supposed to be that young. In some ways, the journey of Paul Atreides, could, visually, play out like the backstory for Kylo Ren that we never saw. Not that the specifics are the same, or that the characters are remotely similar; but instead, that both are young men who rise to great power, but still retain a strange twisted spark of sweetness. In real life, Chalamet is 24 years old, making him nearly the exact same age as MacLachlan in David Lynch's Dune. Yet, my mind believes this man is younger. More importantly, he looks like he can become the badass he's destined to be.

In a new interview with Empire, Chalamet makes it sound like the shooting of Dune is going to be as real as possible. "It wasn’t a green-screen or anything. That’s one of the most thrilling parts of the book and the movie." In the footage, this realism shows. Chalamet has incredible range as an actor, and every scrap of footage we can get of him before Dune is released will likely keep proving that. Throughout the early chapters of Dune, people keep wondering if Paul is actually "the one." With Timothée Chalamet there isn't even a question. I've seen him in the role for less than a minute, and I'm ready to join his quest.

Dune comes to theaters on December 18.

More like this
Entertainment
Jan. 31, 2023
Dune 2 Will Be Hilarious, Says Actor Whose Character Killed His Own Dad
By Ryan Britt
Culture
Jan. 26, 2023
Maze Runner: The Death Cure helped kill the YA dystopia. Can it help revive the genre too?
By Mónica Marie Zorrilla
Entertainment
Jan. 30, 2023
In Infinity Pool, Brandon Cronenberg Puts Alexander Skarsgärd Through Hell
By Isaac Feldberg
LEARN SOMETHING NEW EVERY DAY.
Related Tags
Share: